In Wulverblade, the new sidescrolling beat `em up from the team at Fully Illustrated, you’ll play as one of three Ancient Britons as they carve a bloody swath across Britannia while pushing back the Roman Ninth Legion. While the game is brimming with a deep reverance for history and lore, you don’t need to be a historian to appreciate this excellent Nintendo Switch title! You will, however, need a strong will and quick reaction time to see your characters victorious. Allow me to just come out and say that… 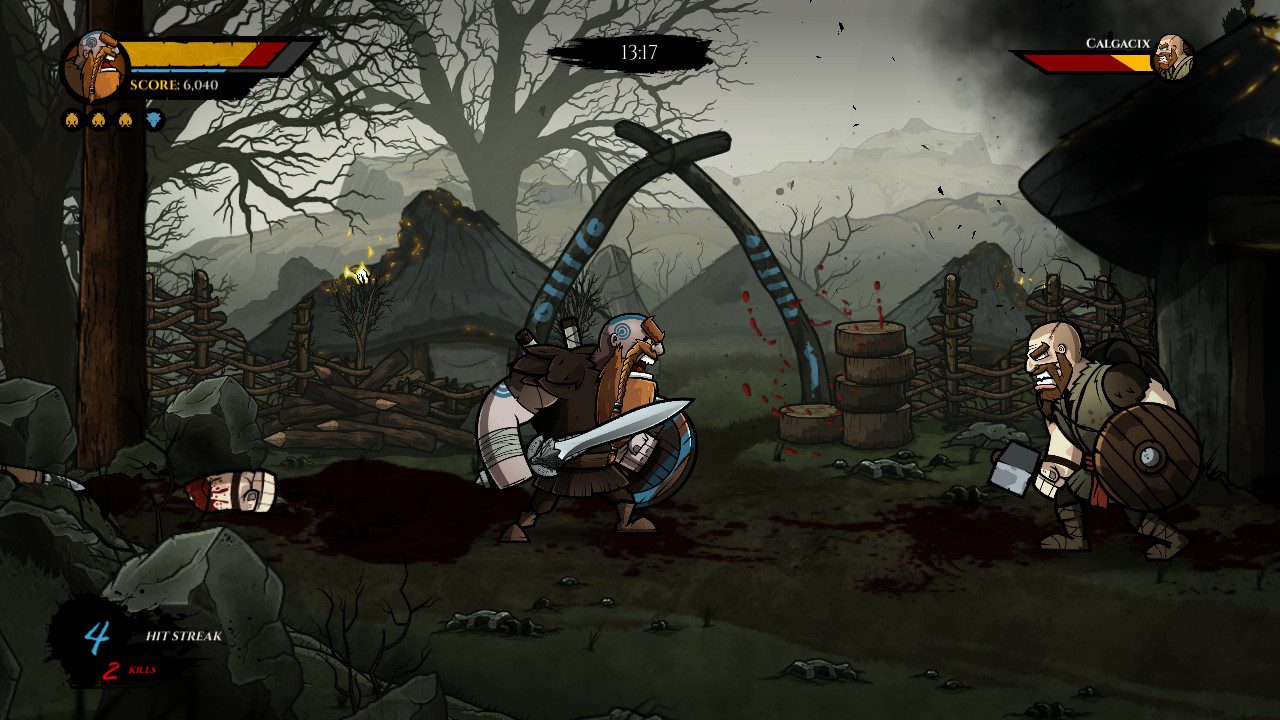 Wulverblade earns its M rating which plays nicely with its genre and mood!

I love the vibrant hand-drawn art of the game that looks fantastic on my Switch’s screen. The varied side-scrolling stages that serve as your battlegrounds are beautiful and full of surprises. Not just unlockables like letters and geographical discriptions – though there are plenty of those to be found.  Animals race through the forest around you, their silhouettes in the foreground obscuring your view at times creating a frantic feeling of a living world. Your allies rush into battle in the background reminding you that you’re not alone in your quest. Your enemies are visually striking and well animated which make them fun to beat around as you decimate their ranks.

I love the sound of Wulverblade. The soundtrack transitions between haunting and exciting as you navigate the menus and various stages across ancient Great Britain. The game is fully voice acted and the talent does a great job of sounding angry at all times and more angry when the need arises. The clang of steel and the meaty sound of ancient weapons rending flesh create appropriately visceral sounds as you defeat your many on-screen enemies.

I (mostly) love the combat of Wulverblade. It’s simple and complex at the same time. Button combinations are a must for you to make any progress at all, and some players may be turned-off prematurely by the fact that the game doesn’t tell you what they are out of the gate. There is little in the way of tutorials here and what help you do get focuses on special tactics. The first is in the way of heavy weapons that you can find scattered randomly throughout the game. All heavy weapons from axes to two-handed swords come with their own lore and strengths. In addition, your character has the ability to summon a loyal pack of wolves once per stage that tear apart large groups of enemies to save you from an otherwise sticky situation. Learning when to use these features so as not to waste them will become very important as you advance.

I particularly love the in-game encyclopedia that details the history and lore that served as inspiration for the project. There are also entries on the many weapons, locations, and characters that can be found throughout the game’s lengthy campaign. I’m not ashamed to admit that I spent the first 20 minutes of my time with Wulverblade reading the unlocked entries and immersing myself in the wealth of knowledge present therein. As a history graduate, it made my heart leap for joy that there had been so much research put into this title. Unlocking entries by discovering secrets throughout the campaign was very much a driving force pushing me onwards. 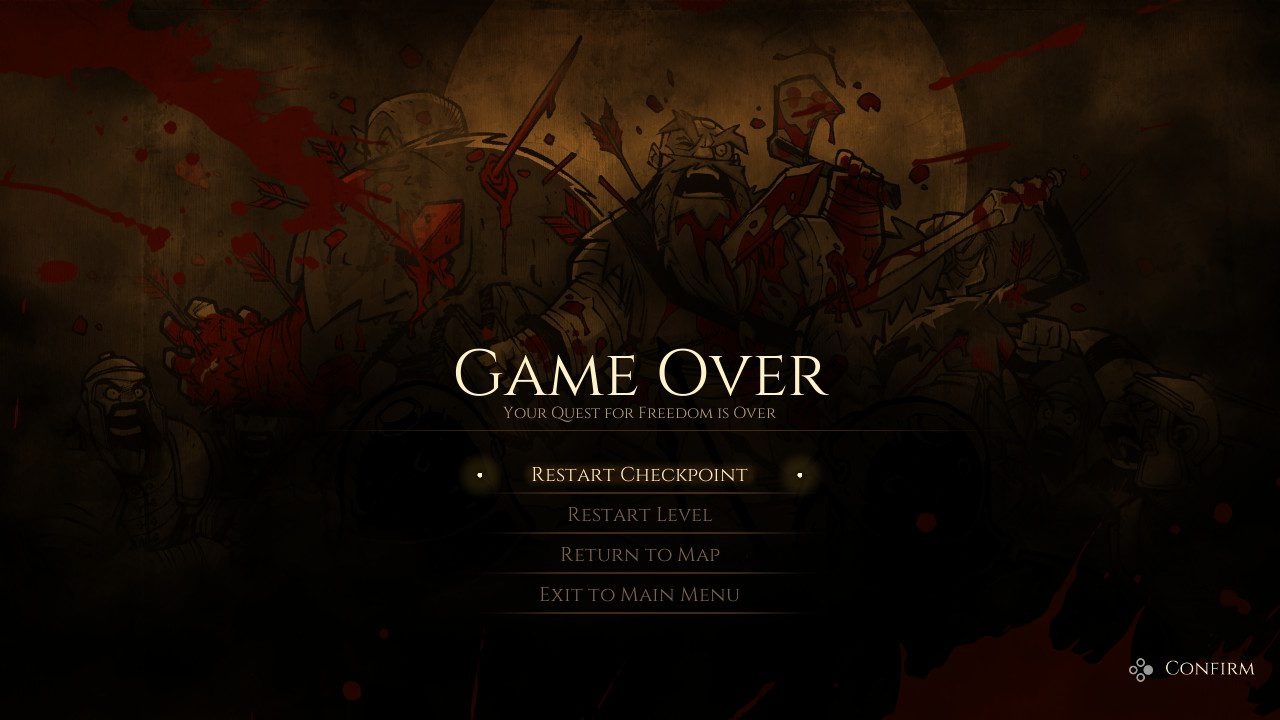 This screen will haunt me in my dreams. For weeks.

…which is why I’m incredibly disappointed to admit that I hit a wall in the campaign and haven’t been able to finish it.

There’s no denying that Wulverblade is a challenging game. All I know is that I threw myself against the aforementioned difficulty wall for over three hours to no avail. I was quite hesitant to write about this because I firmly believe that I’ve had a great time with this game otherwise. If it is me who is to blame because I simply cannot “git gud”, then far be it from me to fault the fine folks over at Fully Illustrated. That being said, let this be a warning to those who are looking for a frustration-free experience: this game can be unforgiving and is totally capable of making you cry.

Do I just suck at video games?

Are the controls responsive enough?

How the hell can I dodge those assassins’ knives?!

But the one that stands out to me the most is…

Have you seen this:
Torchlight III: Every Underpinning Needed for a Genre-Leading ARPG

Was this game designed foremost to be completed with two players?

Wulverblade can – perhaps should – be played with a friend locally. With the amount of enemies on-screen, I can only imagine how much more bearable the game may be with a friend. Unfortunately, I don’t have many friends that live close enough to me to attempt this with. Perhaps I could find someone to help me out, but until then I have no choice but to continuously throw myself agains this spike until I give up or win. 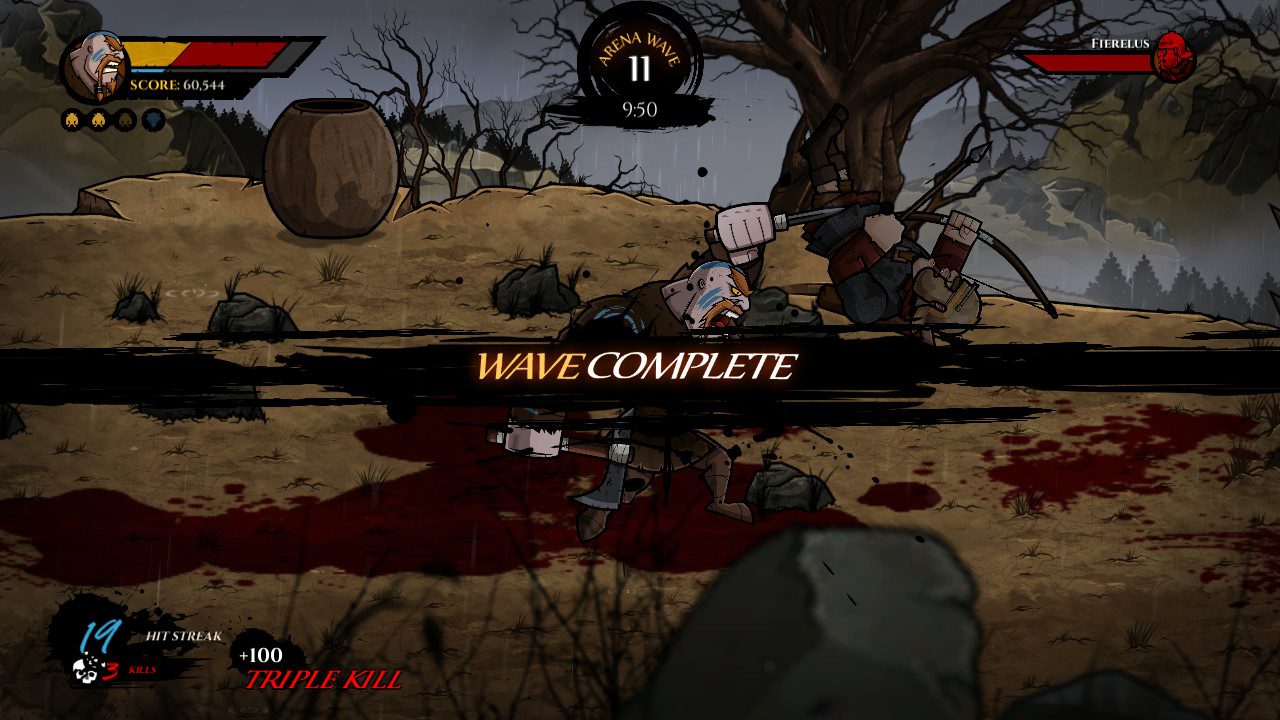 The game features an Arena mode where you can face off against waves of enemies until you fall.

I must admit that I almost threw my Pro Controller a time or two. I rage quit the game twice. After each time, however, I found myself craving more. The last time I quit and began writing this review only to find myself staring at my Switch, wondering if I could just tough it out. It turns out that I could not. Even now, as I finish this-… can it be a review without having finished it? I can feel myself being pulled back. There is undoubtedly something special about Wulverblade. Is its siren’s song luring me back only to have my heart broken once more by its unforgiving nature? Perhaps. Though I’ll leave you with this: Wulverblade has already become my favorite game that I have never beaten.