The art in X-23 has been quite good up to this point. However, Diego Olortegui and Chris O’Halloran took things to another level in X-23 #7.  reason being they really drew X-23 well. Sure, Honey Badger looks great, but Laura is next-level in X-23 #7. The definition and detail that went into her face make her look significantly older than Gabby, and that’s a good thing. In recent issues of X-23, it looked like Laura was only 18 to Gabby’s 14 at times. In X-23 #7, the age separation looks more like 10 years or more.

That definition is also crucial to Laura’s personality. She’s not a kid by any stretch. She’s seen a lot, she’s DONE a lot and her appearance should reflect that. That’s not saying Laura should be run-down like Old Man Logan, but she’s an adult and should look like it.

Olortegui and O’Halloran’s also did a great job with the X-23 and Honey Badger’s fight with the millionth Wolverine/X-23 clone—which is apparently part cyborg, as well. Seems she’s going to be the main focus going forward and lead Laura and Gabby towards Alchemax—the place that created them. The question with this clone, though: can she feel or is she more machine than human? Gabby is clearly empathetic towards her new “sister,” and Laura, shockingly, isn’t. Maybe the latter will change her opinion in time.

Last thing, and maybe most important in all of this, Gabby seriously ordered a Pop Rocks and Peanut Butter ice cream cone. It looks like the Pop Rocks ice cream was vanilla ice cream with Pop Rocks, which is actually kind of a thing in real life. In no way does that sound enjoyable. Laura is clearly neglecting her younger sister and it is not OK. 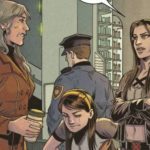