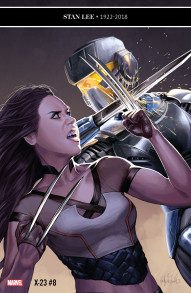 The best thing Marvel did for the X-23 series brings Diego Olortegui as the series’ penciler and Walden Wong as the inker. Their work, along with Chris O’Halloran’s colors, has given X-23 the gritty and edgy appearance to needed to compliment the way Mariko Tamaki has written the character. The detail for Honey Badger has been great, as well, but her personality allows for a softer look at times, too.

However, Honey Badger did hog the spotlight throughout all the action in x-23 #8. Her fight-banter is certainly different from most characters. Yet you witness what she does to others and it’s clear she’s a descendant of Wolverine.

She took on the bad guys alone because…? Gabby can obviously handle herself against a dozen gunmen, but what kept Laura from hopping in? It’s not like she did anything to protect her cyber clone, which is also known as the X-Assassin.

More from GWW
Change My Mind #81: The New Mutants

Turns out, the same man who brought us Honey Badger and X-23, Dr. Robert Chandler, was also the creator of the X-Assassin. He claims this version doesn’t have the problems X-23 has and blah, blah, blah. Look, these evil scientists very seldom get it right. There’s no reason these investors, or whoever it is Dr. Chandler is meeting with, should trust him.

That being said, Gabby isn’t exactly handling this cyber sister well. She’s too attached and it could get her in trouble. Based on what we saw at the end, it doesn’t look like Honey Badger and the X-Assassin will be having sleepovers every Saturday night. But she should be fine if the X-Assassins’ healing factor really is busted. If it that somehow fixes itself, well, things could get ugly at the X-Mansion.

My one gripe with Tamaki’s run with X-23 is the speed of the issues. In some ways, it’s nice to have a very quick read. And while X-23 has been great under Tamaki’s control, there isn’t a ton of depth. It doesn’t make this series bad—I’d recommend it to anyone looking for something different, or it’d be one of the books I’d recommend to anyone who’s just getting started with comics—but it limits how good the story can be.