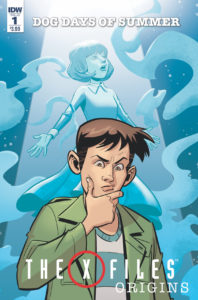 The first half of this book is set in 1974 and centers around a young Fox Mulder.  He is 13 years old and vacationing at Martha’s Vineyard.  This was before he joined the FBI.  He did not even have a clue what the X-Files were.  Even as a young boy, he already believed in the unbelievable.  Houser does an excellent job of making him feel like the Mulder I grew up watching on television.  If this was the entire first issue of this comic, it would have been worth the cover price.  IDW found a way to make it even better.

In the second half of the book we enter 1977 and get to meet Dana Scully in San Diego.  She is similar to Mulder in the fact that 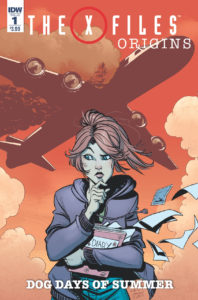 Scully is curious about everything.  The difference lies in what she finds interesting.  Fans of the show will know her as the more skeptical of the duo.  She is the same here… to a degree.  This Dana Scully has a religious background and set of beliefs that I, for one, did not see coming.  It works well for the type of character she becomes in the future.

I believe that this is a really fun and engaging origin story.  There is no gore, or real violence, in this issue, and I am hoping it stays that way.  This would be a really good gateway to a younger audience.  It could then take them to the films and show.  While the characters are relatable to a younger crowd, there are a few references to us older readers.