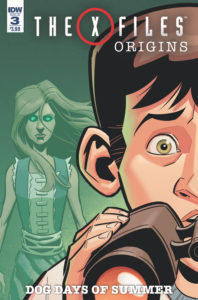 In Fox’s story, we get a lot of filler. Now, this would normally be a complaint coming from me, but it is useful filler in this case. We know that something is going on. Something bad! Something that kills whales. but we are still in the dark about who or what is behind it. Fox and his friends are trying to get to the bottom of it with a little help from a deaf girl named Lisa. These guys have no idea who can be trusted and what it is they are looking for. Assuming that the next issue is a bit more action oriented, this was a good story to fill in some holes.

Scully’s story is a lot more down to earth. It is almost like reading a crime novel more than something based in the X-Files universe. This fits with what we as fans know about her character. Similar to Fox’s story, this one is a little slower moving than the past two issues. But her story is even more fulfilling in 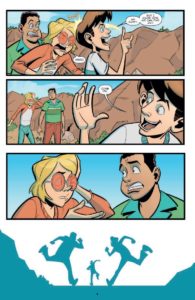 the information it gives. Unlike Fox, Scully is part of her investigation, even if her father does not want her to be. I believe that the writers are getting closer to matching Scully to the person she will become more than they are with Fox. It is still early, though, so anything could happen.

The only issue I have with origin comics like this is the lack of danger. I am, of course, assuming that these stories happen within the same world as the television show. If I am right, then I have no need to worry about Fox or Dana. The plus side of that being that I can relax and just enjoy the story. The down side being, when a character is put in “danger” I know they will make it out alright. It is a small gripe, but still, one I wanted to get out there.