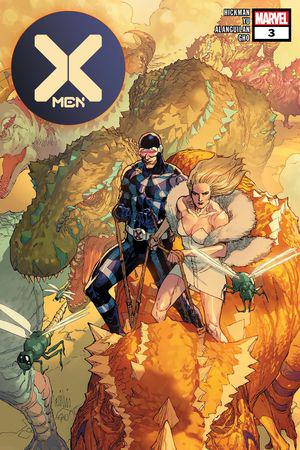 When Marvel announced the relaunch of the X-Men there were a lot of high expectations. Fans were blown away by the detailed and unorthodox direction that writer Jonathan Hickman took the franchise in. A mutant island/state was not on anyone’s radar but as weeks passed and Hickman’s designs became apparent, the island and the character of Krakoa began to take shape. Now months into the run X-Fans have begun to warm to the idea of this mutant paradise.

But as Hickman kept building this new mythos I kept expecting the relaunch to fall into familiar pitfalls by reintroducing characters and ideas that fans were already sick and tired of; how many times can we be told about Magneto’s personal background as a Holocaust survivor? How many times will we be reminded that Prof. X is working towards the peaceful co-existence between man and mutant? All of these tired troupes were just waiting to weigh down this new successful series.

Yet Hickman did something so unexpected in issue number three of this relaunch that I almost fell out of my chair when I read this comic. He broke new ground. Not only did he break new ground, but he introduced a new group of villains that NO ONE saw coming and it is one of the most interesting X-issues to come out to date.

Playing off of the long-standing tradition of humans working to subjugate and oppress mutants, Hickman took the idea of a human-based resistance and put the concept on its ear by introducing the Hordeculture. I know what you’re thinking, “Oh great! Another group of mutant hating nutjobs that I have to keep track of.” Well, this group is… different. REALLY different. Hordeculture is a group of four elderly women who are out to control the world’s food supply and they kick major ass.

The accompanying text in the issue lets readers know that the youngest member of this oddball group is Augusta, a 64-year-old agrochemist. Imagine if the Golden Girls were all world-class bio-engineers, dressed in future-tech, and out to starve the world’s population in an effort to return the globe to a more pristine state.

This group of geriatric invaders has taken issue with Krakoa and the mutant selling of flowers to the human race that is being used to combat illness and disease. The Hordeculture was on the verge of controlling the world’s food supply and the sudden emergence of the mutant island and its magical blooms have destroyed the group’s plans. So they have set out to steal from the X-Nation and figure out a plan to either control Krakoa, or destroy the island.

This issue was a trip to read. There were so many great moments that caught me off guard. Just the character interaction among the Hordeculture themselves is priceless! Reading the way that these four elderly women interact with each other is hilarious. Yet when they explain their background and their motivation the laughs stop and you realize that this group of gray-haired grandmas poise a major threat to the X-Men and the world.

Being a long time X-fan myself I had reserved judgment on this relaunch until I could see where Hickman was going to take the franchise. This issue sealed the deal for me. I’m all in. This was hands down my favorite issue to date, and to be honest one of the best issues of X-Men that I had read in years! This comic hearkens back to the roots of the team. The stakes are high, the villains are just as interesting as the heroes, the story never wavers or falters. This is an X-Men comic as it should be.

There are classic moments here. Watching the catty exchange between Jean Grey and Emma Frost is a delight. Somehow I actually came to enjoy the character of Sebastian Shaw for the first time as he tries to smooth talk these ladies, only to get shut down in a moment of comedy gold. The background of Horticulture is sinister and haunting. The way that four old women beat the hell out of Cyclops and smack talk him while they do it is brilliant. This was a great read from start to finish, filled with moments that made me smile. I haven’t felt this way about the X-Men in years and I can’t wait to see where this story-line is going.

While Hickman has knocked this series out of the park, he is not the only one showing that they can walk the walk as well as talk the talk. Francis Yu is back to form on the art, reminding me of the fantastic work that he did on Secret Invasion just a few years ago. His rough style seems to fit the visual design of these older characters as the sketchy pencils work well for characters that have wrinkles and flawed complexions. There are no wasted panels or space and as an artist, Yu directs the reader’s eye with deft command as action sequences are drawn with fluid movement.

The comic’s color scheme is unusual but effective. There are panels where Sunny Gho and Rain Beredo used the lighting to give the art an almost washed out visual. Yet there are other panels where the vibrant palette is rainbow of colors for the eyes. My one big complaint is the lack of background in some panels. Francis Yu can be sparse on his details when focused on close-ups, not leaving much with the colorists to work with, but the gradient effect that was repeatedly used is bland. I would have like to have seen some variety.

This creative team has set the bar high for expectations when it comes to future issues. But seeing how effortlessly they have cleared expectations already, I think it’s safe to assume that the X-Men and their fans are in good hands. I highly recommend this issue to X-fans. This is an instant classic in the cannon.