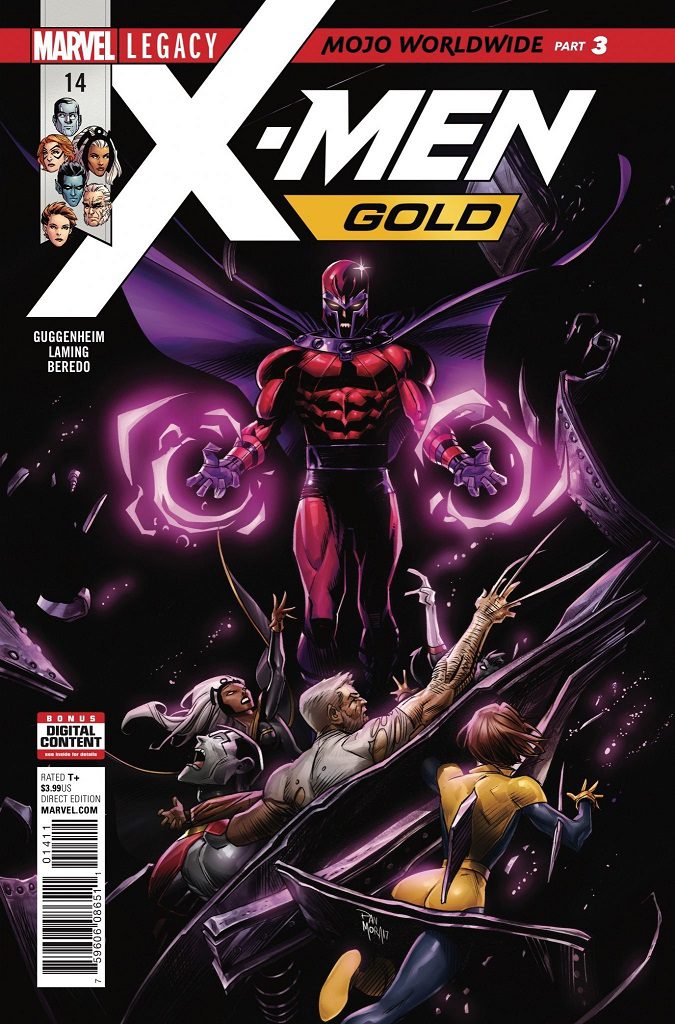 The brand new issue of X-Men Gold continues the crossover adventure with the time-displaced mutants from the X-Men Blue team. In part 3, our teams are still divided off into 3 different groups consisting of members of both Blue and Gold. They continue to fight through simulations set up by Mojo who has trapped them in these battle arenas to gain higher ratings. Because we all know that ratings are important and I’m surprised that Mojo hasn’t pitched a subscription plan to his audience yet to keep his live TV programs from dying off. It definitely reflects a bit of what goes on in the industry today as many try to figure out ways to keep an audience tuning in.

X-Men Gold #14 continues doing a great job of having character development, action, and fun all in one issue. The big hook going into this issue is shown on the cover with Magneto battling one of our teams consisting of Cyclops, Kitty Pryde, Prestige, and Longshot in one of the simulations brought by Mojo. I definitely consider this particular part the main highlight of the issue. As Magneto confronts them, the team quickly defeats him and Cyclops is given a cool moment to shine thanks, to his quick response to Magneto and begins to wonder why the X-Men are working with Magneto in present time. Jean is also given a bit of development as she is confronted by a doppelganger during her team’s fight. 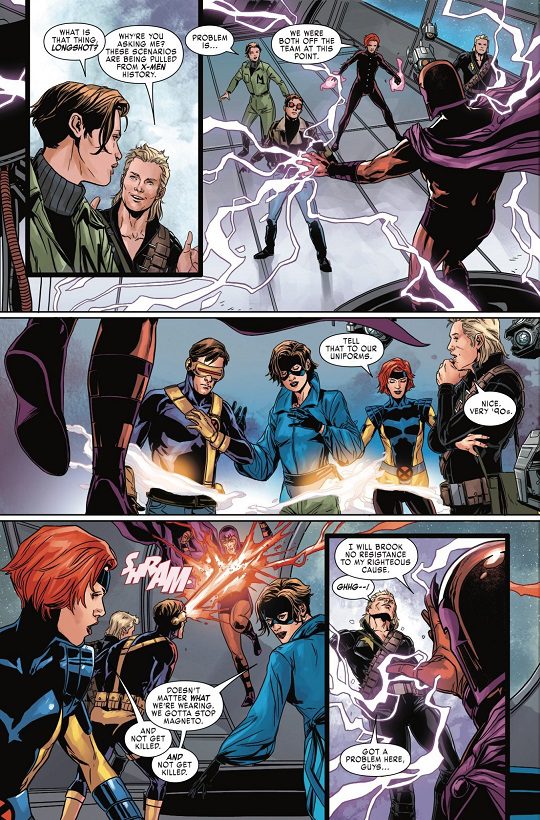 One of the biggest things going on for Jean is trying not become what her future self was and this seems to progress more as she is building confidence in herself. Jean needs this so that she does not consistently dwell on the future. Odd thing to say as most would dwell on the past. If you’re also someone who is familiar with major battles in the X-Men lore, you will certainly get a kick out of this issue as they are thrown around into certain large events that not all of them shared experiences in such as Avengers vs. X-Men. As the team are thrown around into different settings, their costumes change too and it certainly put a smile on my face to see some of the members in their 90’s outfits again. It was very brief but just enough to warm that special place in every geek’s heart. We are left at the end of this issue with a version of the Phoenix force in something that I personally have never seen before but look very much forward to seeing in the next issues.

X-Men Gold continues to be the team book that every comic and mutant fan should be reading. The writing by Marc Guggenheim continues to be engaging and you feel a connection with the characters as they go off on their adventures.Guggenheim is able to balance action, drama, and development with only so many pages. The art by Marc Laming and coloring by Rain Beredo also brings the teams to life and makes all of the characters really pop off the pages. Even when dealing with deathly battles, the bright colors help make it all immensely exciting.