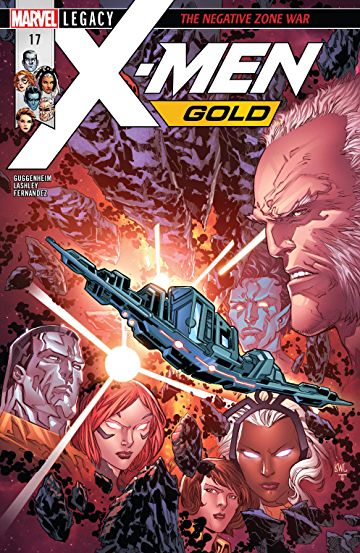 You know, it never really hit me until this issue. Old Man Logan has not had a costume up until now. I absolutely love the explanation for the costume as it is made for the negative zone but Logan still insists that it is called a costume. This is probably the first time he’s worn one since his X-Men days before that dark and tragic day for him. I have to say, I love the design overall. The red really pops as it emphasizes on the X logo.

We get a quick scene with Dr. Adam Brashear which some of you may know from the recent Ultimates and Ultimates 2 comics. Love his little-off and mentions how it’s going to suck to be 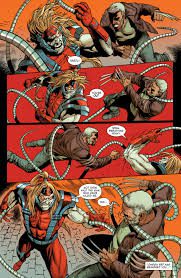 the folks who ever kidnapped Kitty and Nightcrawler. Rachel Grey is pretty much written out of this story for now, and it is a bummer but the team still has another psychic to help them out. Ink isn’t as powerful but I like seeing some more unfamiliar faces to be used in X-Men books. There are plenty of them and it’s always great to showcase and expand your world of characters. All we know whats going on right now is that Kologoth is now back leading his army to take over the planet he was banished from. Not sure if he plans on using his prisoners for anything yet. All that matters is that Kitty and Nightcrawler need to escape. Of course Kitty’s powers are depleted because of her shackles. I mean, it’s really nothing new to have some sort of collar that can just stop powers from working. Nightcrawler though, I love seeing the fire in his eyes as you can feel his determination to escape.

Have you seen this:
X-Men TAS creators Eric & Julia Lewald: A Change My Mind chat

When we see the X-Men land on the planet, they are thrown in the middle of a civil war and I do feel like this action sequence is a bit messy. Perhaps that’s on purpose though as they don’t really know whose side is the “right” side and they do point that out. Logan stepping up as the team leader is fun to see as he is doing all that he can to make sure to bring his teammates and friends back home, no matter what. He still consults with Ororo and this is where I feel like we see how Logan can be a great team player. Even though he is someone that likes to go all in headstrong, you can tell he is thinking what’s best for his team in there situation.

I would’ve love more progression in the story myself as it felt this issue was trying to please all the areas, with some very high moments with some specific characters. We’re still thrown into a fun adventure with X-Men where they may need to fight yet another war.