Year of the Villain Black Adam #1 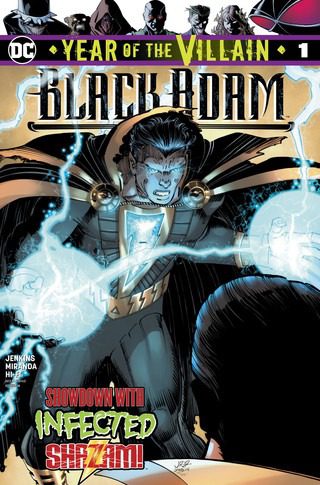 The generals of Khandaq are worried about stories of civil unrest in the country and they are reluctant to bring those troubles to their leader Black Adam. As they approach the man, they not only tell him what they know but also the fact that Shazam has been acting strangely and is on his way to the country.

Adam prepares his country to face the newly minted Shazam Who Laughs and proceeds to show the people that he is more than just the power he wields as the transformed hero causes destruction and beats Adam into submission. Unfortunately for Shazam, Adam has a plan.

This one-shot does a great job of showcasing the complexity of the character of Black Adam. He’s shown as more than a villain and that the people of Khandaq have a complex and nuanced relationship with him that makes him more interesting a character both as a villain and as a leader. The story unfolds brilliantly and Paul Jenkins takes great care to make this story more than just an excuse to utilize the Shazam Who Laughs against his greatest rival. I really enjoyed this issue and am interested in seeing how the events of the Justice/Doom War will affect Adam and his country.

Inaki Miranda puts the cherry on top of this sundae with some great art that showcases the powers of both characters and the scale of their battle.

black adam DC comics year of the villain
Add your voice!Join the conversation on Discord...
Join Our Discord