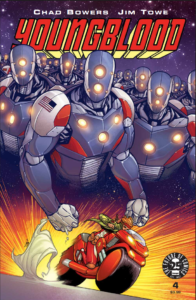 In this fourth issue of Youngblood (REBORN) our reluctant heroes uncover the hidden secret behind the Help! app.  Once they do, the party really starts.  This issue is full of amazing story, and awesome action.  While the first three issues did a great job introducing the characters, this one really brings in the conflict.  While the way Help! is being used did not surprise me, its discovery was very well written.  That is more than can be said for a lot of films and television shows.  I do not have any problem with a mystery being kind of obvious as long as the reveal pays off.  I also appreciate that Chad Bowers did not wait until issue eight or ten to give us this information.  But enough about the secret, before I give it away!

One thing that I really enjoy about Youngblood is the fact that it is a superhero story, but it is not at the same time.  Any time tropes are used, it seems to be to 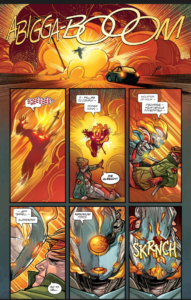 poke fun at them.  There are even a couple references made that caused me to laugh out loud.  If these were intentionally mad is up for Mr. Bowers to say, I may have been reading too much into the lines.  Either way, in the mist of the superhero boom, it is nice to see a book that can be serious and take itself lightly with the right balance.  If you have been reading this series and want to discuss possible references (like Earth 2), feel free to leave a comment here or Tweet to me!

Now I would be remiss if I did not mention the art.  Jim Towe really knows how to draw action.  He does not even need a full-color palette to make it fly off the page.  There is a lot to be said about an artist who knows the power of complimentary colors.  Just look at how he mixes warm and cool colors to make you feel the heat of the moment!