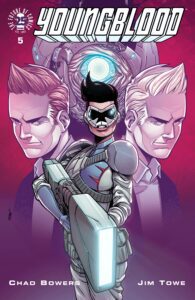 Is it the beginning of the end for the all-new Youngblood? I hate to see this run of Youngblood Reborn leave, but I love to watch it go. We have been given a break in the 4th wall of the super hero world. We have watched a team build, almost fall apart, and rebuild itself again. Now we get to see them kick butt and take names. I hope we get to see more of them in the future. As we all know, just because a season ends does not mean that it is over. But I am burying the story arc before it actually wraps up. We have this issue and number six before we 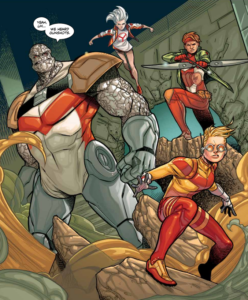 have to say goodbye for now.

In issue five, we see the new Youngbloods in full form. Friends have been reunited and new enemies have been found. There is excellent character development from page one of this issue. I thought it was going to be another slow run and then BOOM! We are dropped into a fight that can rival that of DC and Marvel. Jim Towe knows how to make still panels really move. It is rare to see a duo like Towe and Bowers and I hope to see more from them together in the future. If this ever gets made into an animated series, these two will have to be the showrunners. That being said, I do not see how this could be made any better in another medium. Some things work good on the page, but this works great!