Yoku’s Island Express is a new platforming adventure game developed by Villa Gorilla. Here you play as Yoku, a small cute little beetle that has arrived as the new postman on the island of Mokumana. What begins as a simple task of exploring the island to get your bearings on your new job turns into an adventure of saving the island from a dark disaster. Let me get this out of the way. If you are not a fan of pinball games and pinball controls, you will not like this game then. The way you control Yoku is by pushing a pall around the island. You can’t jump or anything except moving left or right. You’ll find things such as flippers, bumpers, and launchers that will help you traverse the island and you’ll be required to complete certain objectives to open a path to a new area. You control all the flippers and launcher with just the L and R buttons, which are distinguished by color. Blue is for the left trigger, orange is for the right, and launchers can be used with either. No real complaints about the controls, some parts can come off a bit frustrating at times but that’s the nature of pinball. But when you hit those precise points of where you want the ball go, it feels great every time. 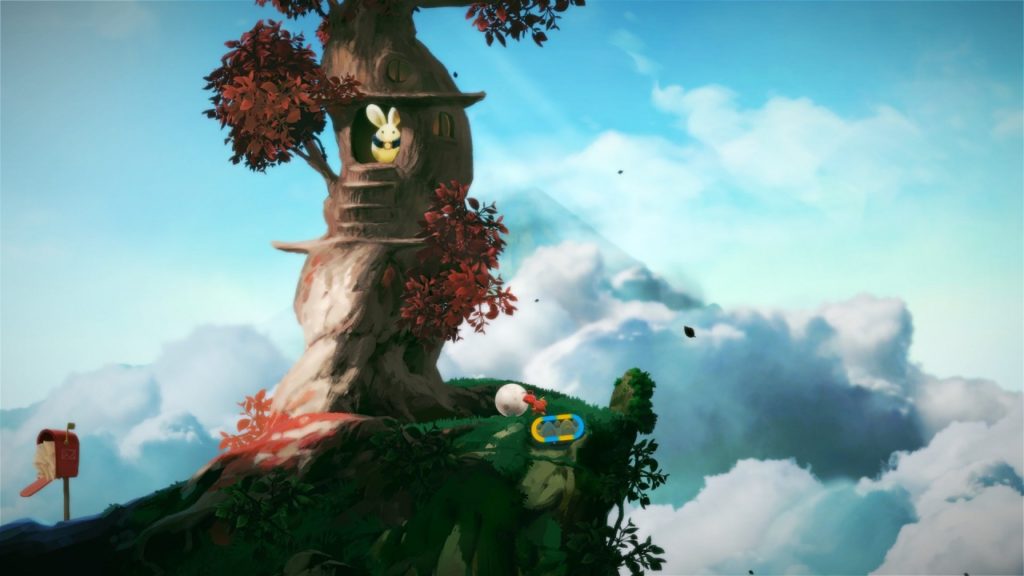 As you progress through the story and explore the island, main and side objectives will earn you new items to help you get around to new places such as a vacuum that sucks up a bug to your ball to blow up a rock that blocks your path. You’re also given an overview map of the island that opens up as you explore and its available anytime to view. Fruit is collected everywhere and used as currency to upgrade your pouch to hold more fruit or to unlock launchers to explore a new area. You’ll also unlock a way of fast traveling around the island, which are done with these beehive like pots that launch you across the island. There are collectibles to grab such as orbs that can change the color of your ball when brought back to a certain character, maps to unlock locations for collectibles, or these wickerling dolls, which are used to light up the 8 torches in the game. After lighting them up, you will unlock the secret ending. Loading your game after completing it takes you right before the final boss so you’re able to clean up and go for whatever it is you may have missed during your play.

The visuals are a beautifully hand painted style and really brings out the simple joy and positive energy that the island gives off of. The setting is very Hawaiian inspired not only by its visuals, but its music too. Which is extremely pleasant to the ears in making the island feel richer. I only experienced slowdowns a very few number of times and it was never during any pinnacle points of the game. When using the fast travel, the game would either slow down for a quick second or need to load the area and this didn’t happen every time I used the fast travel system. I do wish the areas on your map were labeled just to make it easier to know the place you need to go to for specific quests as remembering the names of all the area’s can be tiresome.

Yoku’s Island Express is a great and fun platforming adventure game and with it’s unique control style with pinball flippers, it stands out a bit unique but can be thought as unconventional but the team really made it work. I will say the game is far more enjoyable as long as you take it in short bursts because if you go for long hourly sessions, you may find yourself tired from the exploring and gameplay style. Still, it’s greatly polished game with enough to offer and is most certainly enjoyable on your TV but to me was a better experience in handheld mode while I was playing it during breaks at work.