Ok I admit, I had never heard of Disney’s Zombies until my 6 year old daughter came home singing My Year from the movie. After few questions from me, she began describing how brain eating Zombies were attending a school with regular students. To be honest, Zombies scare her so this peaked my curiosity.

As I contemplated how Disney could create a zombie movie with a ‘G’ rating, a thought occurred to me… The majority of Disney films all have dark subject matter. I can recall the queen in Alice and Wonderland screaming at the top of her lungs, “Off with her head!”

Another example is the 1985 classic Black Cauldron where it received a PG rating for violence. Even if we fast forward to modern times, Frozen began with both parents dying while Elsa grew up locked in her room.

As I quickly updated my memory and began putting my curiosities and expectations together, I decided I was all in on reviewing Zombies. I did tell myself Zombies would be a great film for Walt Disney to introduce some elements from the comics. With a reported 66 billion dollar price tag for buying most of 21st Century Fox, now would be a good a time as any to begin paying that price tag off. 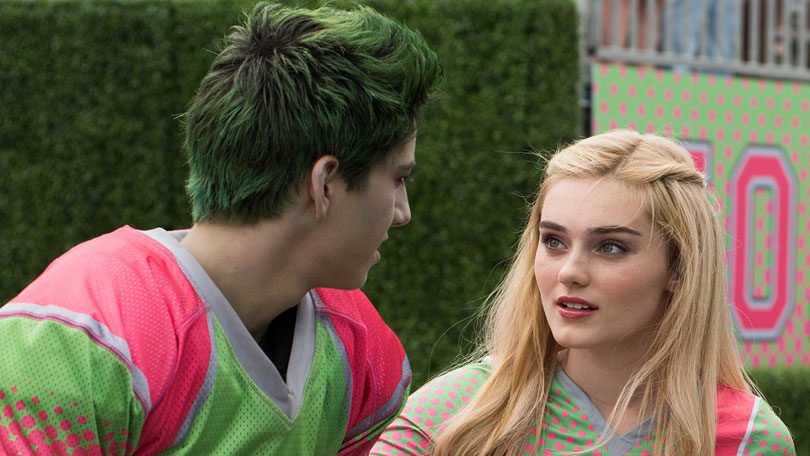 After I received Zombies in the mail, I let it sit on my table for a day. What was I going to find once the movie began playing? Is Zombies a bit out of my demographic?

Finally, I order my chinese food, take a sip from my Wan Tan soup, and hit the play button. Zombies was everything I expected it to be. Straight from the singing and choreographed dance scenes, to transmitting a positive energy and feeling. However, I do feel some of the storyline was extremely rushed and some details in the movie left me scratching my head. Like when Eliza hacked into Zeds Zban. No one on the football field could see his freakish veins and monster-like eyes? Or how Addison’s parents were so involved in her cheerleading career but didn’t know who Zed was and the fact he was a Zombie. Worst of all, Addsion’s dad was the chief of police. I would think a zombie fullback would be the #1 story of the town.

With all its faults, Zombies still sent a positive message about treating everyone equal. We are all flawed in our own ways. Zombies also delivered with fun loving characters, great art direction with a look and feel only Disney can pull off.

At the end of the day, Zombies feels like a bridge for more things to come in the future from Walt Disney. I believe the edgy direction Disney took with Zombies has a lot to do with merging the Marvel Universe in future installments. I believe that buffer helped Zombies be somewhat successful rather than a complete disaster. It is clear Disney is adapting to the times and plans to stick around for a very, very long time.