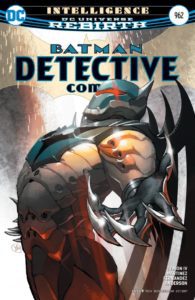 Azrael receives some help in his mental and physical battles from Batwing and the rest of the Bat-family.

Ascalon has turned out to be a more powerful foe than originally thought. The whole group was needed to take him down. This story arc started a tad uneven but it finished strong. Azrael’s internal fight with the St. Dumas system featured some of my favorite art, so I was sad to see it show up only briefly. The Knightfall suit reveal was glorious. We’ve already seen the suit, so that wasn’t a shock, but Jean-Paul Valley’s dialogue as he mentally breaks free from the mind control really made the scene. The fight as a whole was short but sweet and exciting.

The Batman and Zantanna storyline was usually the highlight of the previous issues. Even for someone who isn’t a fan of them having a romantic relationship, writer James Tynion does a great job of showing the bond they both share. Every panel with Zantanna felt personal and less about the battle going on and more about her love for Bruce. Even when she describes what the orb was to Ascalon, it went right back to Bruce. I enjoyed how this relationship was built up and I would definitely like to see it revisited. 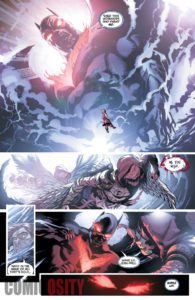 What is next for enlightened Ascalon is unknown, well he knows now because he knows everything. For Game of Thrones fans, the orb is to him what the three eyed Raven is to Bran Stark. One would assume he wouldn’t return as a great threat and become more indifferent to helping humanity. Being unable to see the trees for the forest. Even though the Zantanna storyline was set up, the ending still felt abrupt and incomplete.

Alvaro Martinez and Raul Fernãndez really killed it on this story arc. The artwork was phenomenal and as good as anything currently sitting on the comic shelves today. The action scenes were very detailed and never cluttered. Azrael, Batman, and Zatanna looked amazing throughout the issue. Much like Dexter Soy who is the artist for Red Hood and the Outlaws, I don’t think Alvaro Martinez is getting enough praise for the work he’s turning out right now. Those internal battles with Ascalon were just beautiful.

More from GWW
Change My Mind Chat: Adam Lawson Of The Kill Journal

Two fantastic issues in a row to end this Azrael focused story. It was finally revealed to Batman what readers already knew about Tim, and that mystery is replaced with a new revelation that is unknown to the characters about Ascalon’s identity. This has setup some really interesting future storylines and added a lot to the Azrael mythology.