The one and only fanboy/fangirl-loved and critically-hated Director/Actor: Kevin Smith took to Instagram recently to confirm his completed script of the next Jay and Silent Bob film, simply titled: Jay and Silent Bob Reboot.  The film will apparently focus on the infamous duo of Smith and Jason Mewe’s trek back to Hollywood, where they will try and halt the production of a reboot of the Bluntman and Chronic film as featured in 2001’s Jay and Silent Bob Strike Back, also directed by Smith.  The Director has confirmed, like most his films, that the reboot will be a self referential, and star studded satire on Hollywood and its current obsession with big budget reboots and sequels. 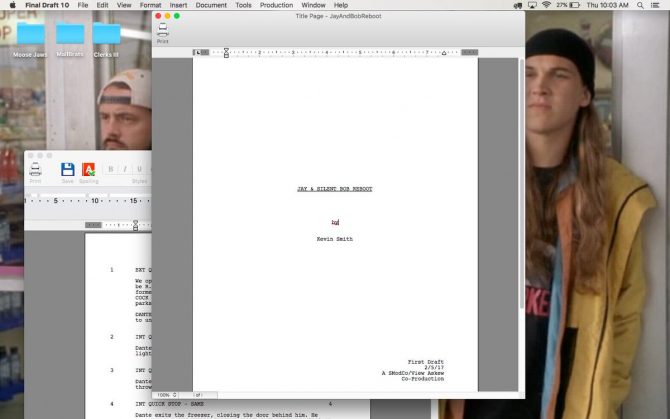 As a self proclaimed Kevin Smith and Smodcast fanboy, I could not be more excited about this film, while also

approaching it with cautious optimism.  This isn’t the first time that Smith has promised a sequel to one of his cut classics. Mall Rat’s 2 seemed ready to start production, but was ultimately scrapped.  The director has promised however, that will not be case here as previous project cancellations had to do with scheduling conflicts, and actor commitments.  Reportedly, Smith has already been in talks with Mirimax about distributing the film.

Another aspect that is halting my excitement a little bit is that this film seems like nothing more than a rehash of the original Jay and Silent Bob film which featured the duo traveling to Hollywood to halt the Bluntman and Chronic film, however knowing Smith’s brand of comedy the way I do, that could be exactly the point.  One thing is for sure, myself and many other Smith acolytes will gladly put $15 into the Directors hand and show me show me show me show if this film ever makes it to theaters.