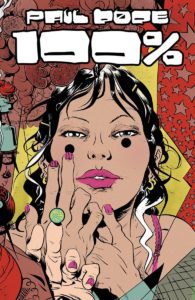 Paul Pope has become his own brand within the comics industry. This talented storyteller has been wowing audiences with his unique style of art and words while racking up an impressive five Eisner awards. Most mainstream readers will recognize the artist’s name from works like Batman Year 100 and Battling Boy; it’s Pope’s devotion to pop culture and his ability to reflect our chaotic world back at society that has made him a sought after talent. But it’s here in the pages of 100% that we see Pope get personal in ways only a true artist can.

This graphic novel is a love letter. It’s a sappy ode to the city, an eloquent summary of life under neon lights, a sincere look at love in the middle of all the hustle and bustle, where the characters of the street each have their own role to play. Lives converging and separating as the city pounds out it’s haunting beat to the tune of the bars and traffic that make it hum.

Pope drapes his love letter to NYC in the trappings of fiction. Moving the setting to the not so distant future. Taking his artistic liberties with technology and the minor details of daily life. This is and isn’t the familiar streets that we have seen so many lovesick artists write about. This isn’t about living in the burrows. This is just a few shades removed, but the intent is there. The feeling is there.

Pope brings this declaration of love to life with his cast of weary and exotic characters; each flawed, each searching for something to hold onto as they live their little lives. For some it’s a search for love, for others, its a search for acceptance, and still others are just trying to survive the night to get to the next day. But each player on the stage brings their own special perspective and voice to the story. Their tales intertwine and crisscross until the last page, leaving the reader to feel moved. Changed by the honesty and the imagination that has played out in front of them.

100% is a story that centers around the lives of one club and the lives that intersect within it. The Cat House; part dance club, part bar, part lounge, part strip club, part live sex show… it’s a mixture of nightlife and the cast that resides inside this amalgamation is just as varied as the purposes that the Cat House serves. From bartenders to strippers to staff members in between the characters all ring true with dialogue that is as natural sounding as listening to a conversation taking place at the next table over. 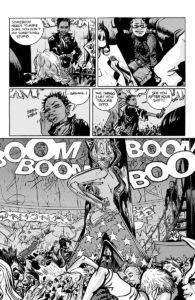 While the story takes its time to come to a proper boil the screaming whistle that draws all the attention of this series is the art. Pope has not lost a step in taking his own flair and street suave designs to another level in this series. 100% is as much influenced by the multicultural cast and city as it is by the artist’s keen eye for detail when it’s needed and action when it’s called for.

To try and summarize this layered story piece by piece in this review would be an injustice to the complex story that awaits the readers. The true genius of this graphic novel is something that you have to experience first hand. To have me sit here and breakdown sub-plots, symbolism, foreshadowing, and all the other storytelling tricks would be a disservice instead of an enhancement.

Just know that 100% is a graphic novel that pushes readers into a world that somehow finds a balance between a Wes Anderson-type cast set in a Sin City-Esque backdrop and the stories of the Cat House mingle together until the reader is caught in Pope’s web.