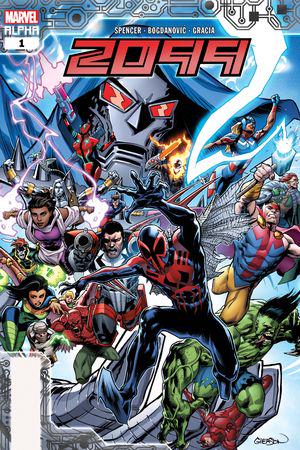 In 1992, Marvel introduced a line of 2099 comics. Spider-man, Doom, Ravage, and Punisher. X-men, Hulk, Ghost Rider, and others followed. The line ended in 1998 and Marvel has revisited those characters occasionally through the 2014 series Spider-man 2099 and again in the universe collapsing events around Secret Wars in 2015. Writer Nick Spencer and others return to this time period here in 2099 with a new interpretation of the setting and the characters. While the cover art suggests the characters from the ’90s 2099 universe, the opening issue in this crossover creates a whole new experience.

Nick Spencer spends this issue world-building and introducing hints of former and new characters. The world-building provides the reader with a strong sense of environment, but the storytelling does little to explain the overall conflict or focus of the crossover. This may be the intention of this issue, given that companion issues like Fantastic Four 2099 hit the shelves the same day. Most of the action in this event will take place in these individual titles, with Alpha and an Omega issue book-ending the narrative. The result is an issue that feels limited in the moment but may prove significant by the time readers get to the Omega issue. This presents a challenge for readers both in understanding what is happening and for investing in the characters.

Fortunately, no knowledge of the previous 2099 line appears necessary. Spencer does use some previous characters and settings and readers will find some familiar faces, but the narrative moves around enough and provides sufficient exposition that readers without prior knowledge will be able to engage in the series as well. The lack of existing knowledge may even create a more enjoyable experience compared to readers who may try to reconcile the previous version of the universe with this updated interpretation.

The artwork by Viktor Bogdanovic is clean and distinguishes characters across multiple settings. Bogdanovic’s depictions of settings help Spencer’s efforts to create this world. Colorist Marte Gracia’s work is the standout of this introductory issue. Gracia’s use of neon shading and light sources creates a unique world that draws the reader in, even if it is not clear what they are being drawn into.

2099 Alpha is a visually beautiful book that sets the stage for future action. Readers will more likely be pulled into the narratives of the individual titles, but Nick Spencer has proven that he can craft a complex narrative. Sometimes those story arcs resonate with fans, as in Captain America and his current run on Amazing Spider-man, and sometimes they fall flat, like Secret Empire. Time will tell if this is more of the former rather than the latter.