From robots and light guns to printers and sonar, Nintendo has steadily maintained their position at the forefront of gaming and technology.

Despite their attempts to further ensnare the casual Tetris players, the collection of Nintendo accessories has always been somewhat of a mixed bag. Beginning with the Famicom, Nintendo’s technological innovations consistently aim to be the next big peripheral that will shoot their consoles into the stratosphere. Unfortunately, these additions to the family are often focused on expanding the consumer base of their product instead of contributing to the expansion of the larger gaming pantheon. Most seemed to be doomed by the specific (and limited) use of the accessories as well as their lack of integration into the larger Nintendo library (look no further than the mere 12 games compatible with the Super Scope 6). While the company would eventually reach its goal of ubiquity with Wii Sports and the Wii Fit, the first ten years of accessories were… unique. No more beating around the bush, let’s take a look at Nintendo’s early foray into exclusive gaming accessories. 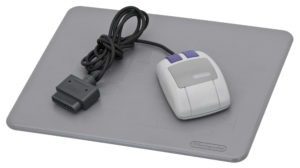 As seen in every discount bin around the world… the SNES Mouse! Originally implemented and packaged with Mario Paint, another bargain bin staple, the SNES Mouse is compatible with both the SNES and the Super Game Boy. In appearance, the SNES Mouse is smaller than the average mouse and (much like the NES Classic) had a debilitatingly short cord. With a surprisingly large list of compatible titles (Jurassic Park, Archanoid: Doh It Again, Doom, Tin Star), the SNES Mouse was extremely useful for early console FPS titles, Point and Click Adventures, Sims, and Rail Shooters (genres that were hamstrung by clunky menus and controls when using the traditional controller). Unfortunately, this wasn’t enough to capture the growing base of gamers that were playing video games to get away from the new trend of personal computers (it was 1992) and the SNES Mouse quickly faded into obscurity. 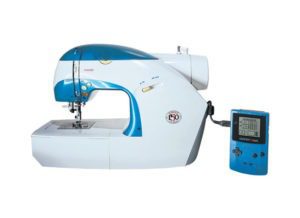 Do you like sewing? How about watching a machine cross stitching a selected few Nintendo characters? Well, you’re in luck! Arguably one of the rarest and specialized accessories, the Jaguar JN-100 Sewing Machine came packaged with a special link cable that connected to the Game Boy Color.  Also needed was the exclusive game Mario Family, a cartridge with the sole purpose of interacting with the JN-100.

At the time, Jaguar was the largest sewing machine manufacturer in Japan. Players would then use Game Boy Color to customize images of classic Nintendo characters. Once the design was to the player’s liking, the Game Boy Color would then communicate with the sewing machine to cross stitch the pattern onto fabric. Due to the Game Boy Sewing Machine’s specialized nature and late release in the console life cycle, sales weren’t as profitable as Nintendo had hoped and thus the peripheral only had a short lifespan. 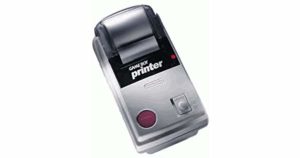 The Game Boy Printer is one of the more commonly found attachments in the vast library of Game Boy accessories. Along with the Game Boy Camera, another easily found accessory that had limited functionality, players could take rudimentary screenshots or other visual stills and then print them off on small thermo-printer adhesive paper. Titles with the most functionality were The Legend of Zelda: Link’s Awakening (featuring special scenes meant to be printed) and a few Pokémon titles (that allowed you to print pictures of your party). Most of the Game Boy Printer’s use centered around printing stickers, passwords, hi-scores, and screenshots, however, some games such as Super Mario Deluxe, had unlockables that can only be accessed via the use of the printer. 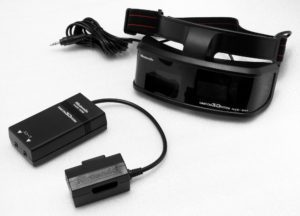 This Japan-exclusive is one of the rarer (and unknown) accessories in the Nintendo vaults. The Famicom 3D System used glasses that transformed the image into stereoscopic 3D, creating a mind-blowing effect (in 1987) for a small handful of NES games. The 3D system used active shutter glasses (a long out of use technology) and an adapter that connected via the third player expansion port and a 3.5 mm jack. Unfortunately, the 3D system was dead on arrival as there were only seven compatible titles (most notably Rad Racer) and the release was closely followed by the SegaScope 3D glasses (another forgotten attempt at 3D gaming). Nintendo would again take a swing and miss with another high-profile failure in the 3D gaming arena via the Virtual Boy before they would hit the mark with the tremendously popular 3DS handheld console. 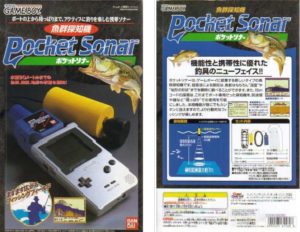 Last on the list is another Japan exclusive, the Game Boy Pocket Sonar. This rare and unusual accessory was not really for gaming at all. Made by Bandai, the folks that brought us Power Rangers, the Game Boy Pocket Sonar used for real-life fishing.  The attachment used sonar capabilities to locate fish up to 20 meters underwater. For the hardcore gamers/fishermen out there, the sonar accessory was not completely game free and featured a mini-game that was centered around… well… fishing. Just another example of Nintendo being ahead of its time, albeit in a somewhat useless fashion.

What did you think of our list? What were your favorite gaming accessories? Comment below and stay tuned to the GWW for more fun gaming facts.