5 Retro Basketball Games to Play During the NBA Finals

I’m a sucker for competition and sports are no exception. When it comes to sports video games, there’s just something about accomplishing digital athletic feats and reigning victorious over your friends that just cannot be replicated and keeps players coming back for more. Each year we see new iterations from standout franchise such as NBA2K or Madden with each annual entry featuring updated graphics, rosters, modes, trophies, etc., all of which are followed with a flood of gamers saying “has anything changed?”

With the NBA Finals tipping off (and the Cleveland Cavaliers suffering a rough opening night defeat) we at the GWW have shifted our gaze the past and taken a look at some of the best retro basketball games available. Whether it is fictional characters, accurate rosters, classic NBA teams, or your favorite cartoons, there are basketball games for all tastes. Without further ado, let’s dive in to some fun retro hoops titles. 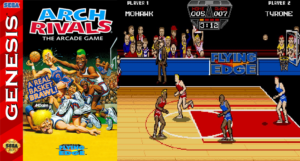 Released by Midway in 1989, Arch Rivals is a great example of an early arcade port that fit perfectly on home consoles. The game is basically a precursor to NBA Jam and features similar systems such as the 2-on-2 and “punch steals.” Players can choose from a variety of fictional teams, all with good old 90’s extreme personalities. Billed by Midway as “A Basket Brawl”, the basic “punch-steal-shoot” mechanics help speed up what is otherwise a very slow paced game. The main flaw with this game is the excruciatingly simple music. I highly recommend muting the TV for this one and blasting your favorite jams of 1992 on some sweet boombox action (Wreckx-n-Effect’s Rump Shaker is my suggestion).

The follow up to Acclaim’s successful NBA Jam keeps all the great aspects of the original while adding a few new features. NBA Jam T.E. features all 27 teams from the 1994-95 season (Clyde “The Glide Drexler!) with over 120 players and 40 hidden characters. My favorite addition to the series, besides hidden characters Fresh Prince and DJ Jazzy Jeff, was the introduction of the third player for each team. This added some much needed depth to the original two-man roster and played well with the fatigue stat that was introduced. Additional improvements included power-ups, new dunks, updated AI, in-depth player attributes, and a reorganized soundtrack. 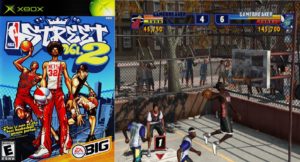 This 3-on-3 basketball game definitely takes advantage of licensing to an extreme. In the game, there are 29 fully playable NBA teams and TONS of historical players (Rick Barry anyone?) to choose from. Honestly, this makes the game so much fun. Although this is a sports game it does include lots of RPG elements, including unlockable content and experience points. Comprising of four game modes, NBA Street Vol. 2 follows its predecessor with a variety of fun and interesting scenarios including a “create your own player” mode. Players travel the court with high flying dunks and smooth handles which helps this game differ from the simulation heavy games of now while still maintaining the look and feel of a modern game. Absolutely worth a pick up for the price and it’s a great party game.

This is definitely the closest to a basketball simulator that is on this list. In 1992, Tecmo was riding high on the success of their NFL sports titles. Tecmo Bowl and Tecmo Super Bowl were arguably the most popular football games available on the home console and the developer looked to double down on their successes with Tecmo Super NBA Basketball for the Super Nintendo. Teams are modeled on the 1992 NBA roster and even include Michael Jordan as a playable character, something uncommon at the time due to the MJ licensing rights.  The game is also one of the few ones for 16-bit generation where it is possible to watch every single game instead of playing only with the team you select (and who wouldn’t want that!).

This just may be my favorite basketball game on the Super Nintendo. Looney Tunes B-Ball is an arcade style basketball game featuring all of your favorite Looney Tunes characters. The game plays like a predecessor to all of the current Mario sports titles, allowing fun and frantic matches between overpowered fictional characters. Much like NBA Jam, this title features two-on-two gameplay with raucous dunks and special moves. Players can collect gems on the court to purchase in-game power-ups, such as a protective forcefield or a cream pie to throw at opponents. Another power-up which can be purchased is a character-unique signature long-range shot (for a 3-point field goal). I’m a sucker for signature moves and these do not disappoint.

What are your favorite basketball games? Do you like arcade or simulation style titles?  Comment below, watch the playoffs, and stay tuned to GWW for more video game news.