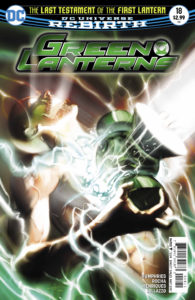 Billions of years into his future, in the Dead Zone itself, Volthoom contemplates the end of his existence. As the Black Lantern Nekron moves ever closer, the self-proclaimed First Lantern tells his sad tale. As a malignant force destroys his homeworld, Volthoom miraculously escapes from the devastation with an invention that he and his scientist mother created that could tap into the emotional spectrum. As he traveled the multiverse searching for a world that would fit his needs, he becomes more and more dependent on the lantern and the potential power that he can unlock. When he meets another race that is willing to pour their emotions into the Lantern, he doesn’t hesitate and his experiment creates the ultimate ring. 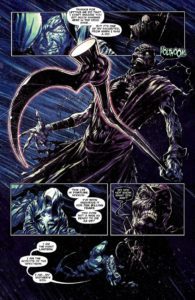 As he contemplates the billions of years of his existence and how he blames the Guardians for the majority of his torment, he also recognizes the futility of his constant fight. He wants to die. He wants his soul rendered and his personal suffering to end. When this request is denied, Volthoom discovers his purpose, his reason for existence and his connection to the emotional spectrum. Unfortunately, this discovery will not end well for anyone, especially the Guardians.

As supervillain origin stories go, this one was decent. There were many of the tropes that are all too prevalent in comics regarding the loss of a loved one and that loss leading one down a path of moral, ethical and physical destruction. Sam Humphries manages to make Volthoom’s journey interesting and tragic as there are moments when you feel for him and want him to receive the release that he so desperately craves. Robson Rocha’s artwork is really well done and many of the panels, especially the ones with Volthoom alone have the composition and look of Italian Renaissance art. While there is a noticeable absence of Green Lanterns in this issue, it does effectively set the stage for an oncoming threat with motivations that are not entirely unreasonable.