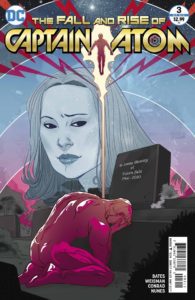 The Fall and Rise of Captain Atom #3
DC Comics

Written by: Cary Bates and Greg Weisman
Art by: Will Conrad
Colors by: Ivan Nunes

It seriously seems like Nathaniel Adams cannot catch a break in this life or any other. After the devastating events of the last issue which saw him hurtling back to the present, Captain Atom finds himself re-powered and on the run. With his memories of his past life still fresh on his mind, he races from the scene of the disaster that started his journey only to find that he is being monitored by an old friend. As Dr. Megala explains to Captain Atom the changes in his molecular structure and what this means for his powers, General Eiling has abandoned a meeting with the Joint Chiefs in order to tend to an agenda of his own. 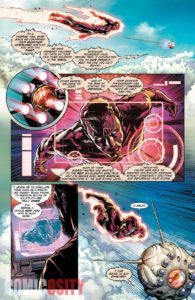 As Captain Atom comes to grips with this new reality, he becomes focused on holding onto the life he lived in the past. His wife Takara, whom he left pregnant and alone, is his primary focus. The revelation of his wife’s fate is devastating both to Nathaniel and the audience. His grief leads him to abandon the advice of the doctor and destroy the drone that has been following him for the vacuum of space. As his powers have changed, he cannot withstand the forces and plummets back to Earth and into the arms of General Eiling. As Captain Atom gets back into the routine of testing the limits of his powers, there is a new revelation that could further complicate his return and the future of Project Resurgence.

This story continues to be both tragic and triumphant. I continue to be impressed with the depths of emotion that this series is willing to bring forth. This is a very adult story that doesn’t shy away from the emotional impact that this adventure is having on the man himself. The writing continues to be amazing and poignant. The art by Will Conrad is beautifully detailed in this issue and he is able to convey real emotion in how he draws Captain Atom. I continue to enjoy this series and look forward to the next installment for good or ill.