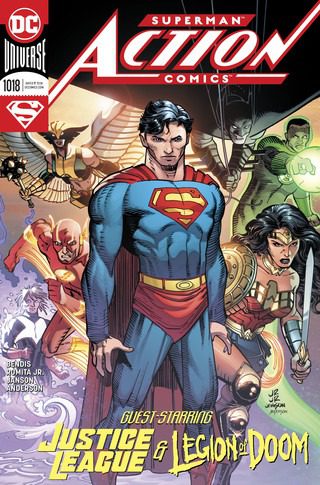 After the action-filled, but light on story Action #1017, writer Brian Michael Bendis jumps the issue backward in time to provide context and narrative during the battle with the Legion of Doom. These jumps provide engaging story beats that provide readers human characters to invest in beyond another superhero/supervillain battle. The result is a comic that does more to invest readers in the world of two Action Comics characters than to progress the battle.

Bendis starts the issue with the origin story of Red Cloud, the villain that occupied Superman’s attention before the Levitation storyline and was tied into the arson fires from the start of Bendis’ run. Reporter Robinson Goode, who would later be a reporter at the Daily Planet, stumbles into a secret scientific experiment at Star Labs and merges with an inter-dimensional mist. The reveal feels sudden and out of place as the group of scientists turn violent against the reporter only to have her merge with the mist. While it gives the reader a reason to care about a passionate reporter in the wrong place and time, it, unfortunately, feels random or out of place without footnotes or explanations tying it to the larger DC world. This backstory introduced how she got powers, but not why she is using them.

Bendis also introduced Fire Chief Moore early in his run as she investigated the arson crimes. As Fire Chief Moore speaks to Clark about how Superman inspired her to seek the truth, Clark reveals to her his truth citing the coming press conference reveal to the world. The interaction between Clark Kent, Moore, and eventually Superman results in a candid character moment that reveals just as much as Superman #18 about why Superman reveals his Clark Kent identity. At the core of the character is a belief in the truth, truth about the world around us and about being true to ourselves.

Romita Jr.’s artwork excels here and captures both Clark’s humbleness in the reveal and Moore’s shock at being trusted with the secret. Romita’s style works well in active battles but here he captures the emotion of the moment through the still eyes and subtle facial expressions.

Action Comics #1018 succeeds as two short character stories tucked inside the ongoing battle. And even though there are some questionable pacing and sequencing for those reading the rest of the Superman line, Bendis gives readers reasons to care about the side characters in his ongoing story.