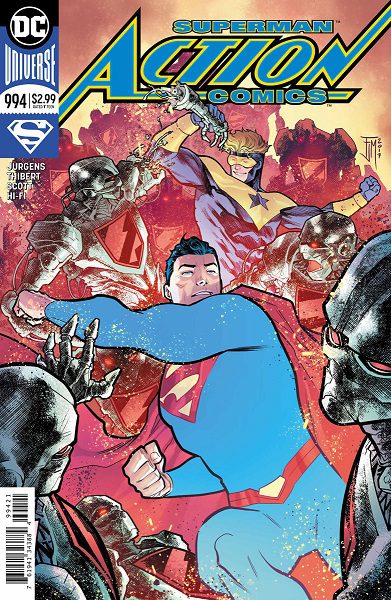 I’ve been pretty excited to see Booster Gold back as he helps to keep the timeline intact while Superman is out trying to discover if his father actually died on Krypton. Even though this is a Superman book, I was glad to see Booster Gold take the lead many times as Superman has no powers due to a red sun. I also really enjoyed how they keep Superman thinking on his feet as he borrows one of Boosters gloves and uses its blasters. I think fans will be a bit mixed on how Superman was written in this issue. As we’re seeing him constantly putting the time stream in danger for the sake of his personal questions being answered. I do think he is valid on searching for answers, as he knows something else is out there, but some of the things that occur just don’t seem to be completely within his character.

Probably the best part on Superman in this issue is how he’s willing to keep fighting even without his powers. When it came to almost damaging the timeline permanently 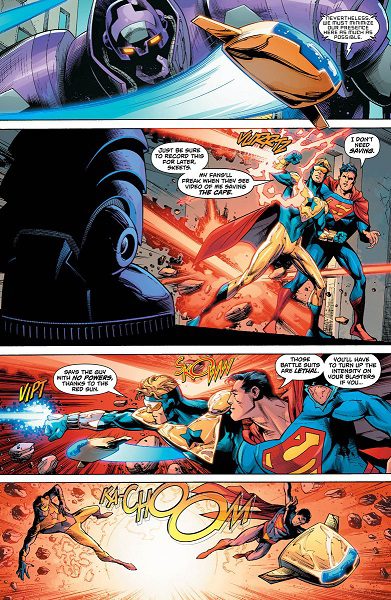 though, that’s where things will feel a little off. Not a whole lot of time is spent on the side story with Lois as she tries to find out if her father is going to be rescued or not. Since their relationship has always been a struggle. I’m a bit only half interested to see if anything will really come out of it. The only thing that will really make any changes is introducing Jonathan to his grandfather and maybe that will bring them close together, but for how long? One page I really liked was the splash showing Superman in an alternate future with a different wife and kid. It’s always fun seeing these little what if scenarios but Superman’s reaction to Booster is just a bit off to me. He should understand Booster is only doing what he should be and Superman should recognize that this was not a right way of handling his situation. We end the issue with our heroes back to present time bought they unknowingly brought a friend with them and now the city of Gotham may be in danger.

Seeing Superman and Booster Gold together is a fun team up but due to some miscues with the writing, I don’t feel like the teamwork was at it’s fullest in this issue. Booster is definitely the shining character in this issue and hopefully, people will remember that.