Poser #1 is a throwback to 1980s punk culture with a modern twist. The comic takes place in Redondo Beach, CA but begins with a flashback to 1982. Here we are introduced to the first Poser killer and dramatic color palette reminiscent of the 1980s setting with a focus on neons and cool tone purples.

The story begins with a group of teens bullying and threatening a teen often calling him a poser. The teen later kills one of their own in a dramatic death leaving the word “poser” in blood. We cut to years later with a similar group of teens in modern-day Redondo Beach enjoying the punk scene but not before something similar goes terribly wrong.

The coloring change from the flashbacks to current/modern day is drastic enough to catch the readers attention and helps to illustrate the time change within the story. I cannot speak highly enough of Garbark’s coloring. In addition, McCormack’s art is stunning. I appreciated a lot of the more creative panels when the band was singing on stage. Outside of the opening flashback, the club scene was visually my favorite aspect of the book. Between McCormack’s coloring, Garbark’s art and Esposito’s creative lettering of the lyrics the scene was vibrant and energetic.

This comic is great fun and feels like a nod to slasher films like Friday the 13th and more recently, Scream. I am excited to see where this comic goes and how it will continue to play with horror tropes, particularly the “outcast revenge fantasy.” Poser #1 captures a lot of the genre nostalgia for the 1980s that is popular right now in shows such as Stranger Things or the movie IT.

With Halloween on the way and everyone getting into the spooky spirit, this is the perfect book to add to your pull list. Poser #1 hits comic stores Wednesday, September 5. 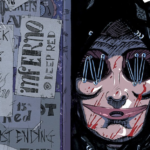