Adventures of the Super Sons #4 Review 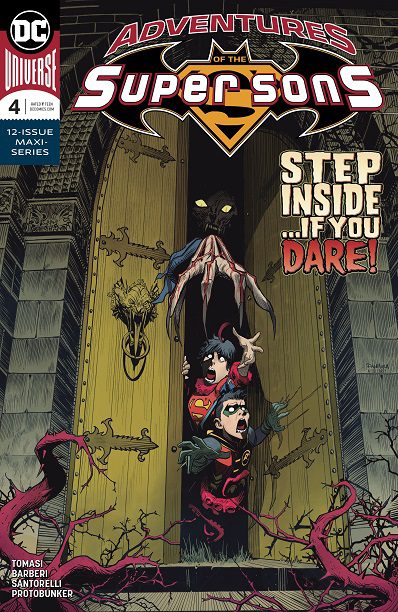 Robin and Superboy Red and Blue find a way to escape from Rex and his crew with the help of Joker Jr and Space Cabbie. After a series of wormhole mishaps, prompted by Jon being violently ill, the cab finds itself on a strange and seemingly uninhabited world. What makes the planet even stranger is that the only structure visible to them is a Victorian manor at the top of a hill.

As Jon and Damian go to the house to look for help, Space Cabbie goes back to fixing his cab. When he finishes, he finds that Joker Jr has other plans for the cab and the cabbie. Inside the house, Jon suddenly finds himself back to normal, but things get weirder when the house begins to talk and strange hands begin reaching out for the young heroes. As they fight for their lives in the strange mansion, they make a discovery that is both shocking and intriguing.

The fact that Tomasi has given such great story arcs for these characters makes it a shame that this is only a 12 issue series. This story continues to be compelling and interesting with every twist and both Rex’s plans and Damian’s determination to stop him are raising the tension and drama in this series to satisfying levels. The relationship dynamic between Jon and Damian continues to be a point of interest as it evolves over time and it continues to be a great pairing in a really fun series.

The art by Barberi is top-notch. There are so many fun and detailed moments in this issue that are made even more engaging with the incredible art and colors.