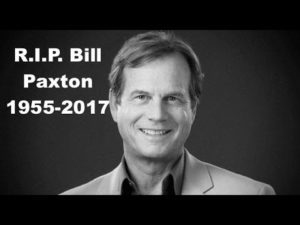 Before I start anything, there was a beautiful end credit dedicated to the memory of the late Bill Paxton. Incredibly thoughtful of Whedon and his team, very happy that they took a moment to pay homage to their late friend and co-star. 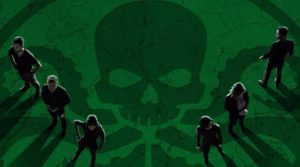 At long last, the wait is over and our favorite SHIELD Agents are back! When we last left our team we experienced a masterclass in action, dramatic tension, suspense, and an incredible mystery delivered by the absolutely phenomenal LMD Arc that we’ve been getting. With the entirety of the team captured and sent into the Framework, Daisy and Simmons plug themselves in so that they can rescue their teammates and free them from the digital world. We were given a horrific tease at the end of ‘Self Control’ back in February, showing Daisy waking up to realize she’s with Ward, Coulson is a teacher who advocates for Hydra’s eradication of the Inhumans, Fitz was shown to be some hot shot, Simmons was apparently dead in the framework as we got to see her tombstone, and May is a high ranking official for Hydra! All of that insanity was what they left us to mull over for six weeks or so and when the episode began it did not disappoint by any stretch of the imagination! The surprises, the chemistry between the cast, the phenomenal writing, excellent visuals, the soul of the story that is being told in the Framework, everything was simply incredible. This episode combines the terror and fear of Daisy and Simmons stranded in the Framework, being the only ones aware of the false reality, while also taking a tremendous leap with the ‘What if’ Comic titles where things are turned upside down because one event went a different way. Almost feels like the Legends of Tomorrow’s time quakes were so intense that they rolled over into Marvel land. 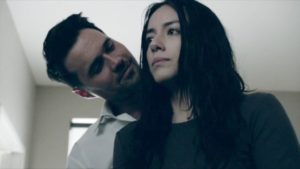 We’re treated with so many amazing moments in this episode. One big one obviously being the return of Grant Ward. Reunited with Daisy within the Framework, and working as Agents for Hydra, the appearance of Ward sends Daisy through a whirlwind of emotions. One hilarious moment was Daisy, apparently without her Inhuman Powers, holding her hand, failing to blast Ward with her seismic blast, he mockingly returns the gesture, joking ‘is this what we’re doing now?’ As Daisy moves throughout Hydra headquarters, her dismay at this false reality almost gets her caught up multiple times, snapping her back into playing along with the game. The tension generated by these almost caught moments are hair-raising and leaves the audience holding their breath to wait and see what’s going to happen. During this time we also find that May is a lead agent for Hydra, and Fitz is referred to as ‘The Doctor’ who employs brutal methods to obtain information and execute prisoners. 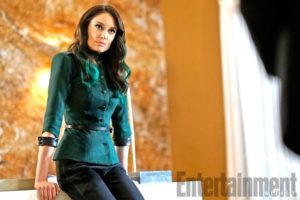 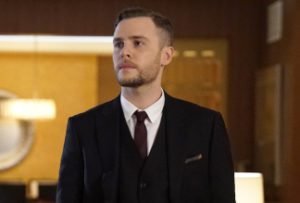 Fitz is revealed to be not only diabolical but heavily associated with Aida, the Director of Hydra, giving us a HUGE Madame Hydra vibe. During this time, poor Simmons digs up from a grave, her body in the Framework showing evidence that her ‘Framework Identity’ was shot and killed, presumably by Hydra. Simmons and Daisy both continue on throughout the episode talking about how insane everything is, referring to how complex the coding is, and that this is nothing but a virtual program. That doesn’t prevent Simmons from having to hitchhike, run when she realizes her SHIELD ID will get her in trouble, steal a jacket and multiple cars, and beat up a few policemen trying to take her in. Simmons tries to seek solace with Coulson, but he is too far embedded into the Framework to do anything but tell her to leave and then call Hydra. 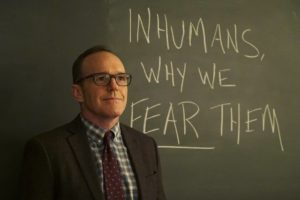 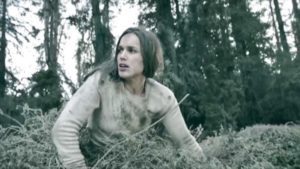 Coulson as a teacher preaches the saving grace of Hydra, who swept up and provided structure after a SHIELD failure permitted a young girl from Bahrain to return to a school and cause numerous casualties. Providing us our core basis for the ‘what if’ scenario for the Framework, what if May hadn’t have killed the Inhuman girl in Bahrain? SHIELD would’ve brought her home, tried to assimilate her, and her powers would cause tremendous damage. Resulting in disillusion with SHIELD, hatred towards Inhumans, and the perfect opportunity for Hydra to take over. Coulson also defends Hydra against one of his students, proclaiming that the ‘rumor’ that Hydra was bred from Nazis is untrue and insulting, a notion Simmons later corrects for the same student, resulting in him lending her his car. Daisy tries to reason with Coulson as well, voicing that he was the one she went to when she needed help or to be calmed down, she brings up trigger words, asking if there are times where things don’t feel right. In the end of the episode, we see Coulson flipping through notes, containing doodles of items such as Lola, and ultimately a postcard from Tahiti. Strong possibility that Coulson will be freed soon from the Framework’s clutches.

Daisy and Simmons finally meet up, discovering that their backdoor out of the Framework was discovered and blocked (presumably by Madame Hydra herself, Aida, or Fitz). They are tracked down by Hydra Agents, given a tip on their location by Coulson. Ward appears and rescues them, revealing that he’s a mole within Hydra and is part of the anti-Hydra resistance. A very entertaining, though predictable, turn for Ward, but it’s kind of nice to have him on the good guy team again and see where the connection between he and Daisy goes. As we end the episode Ward introduces Daisy and Simmons to the resistance.

This episode as a whole is great, action packed, a lot of emotion and suspense, and the chemistry throughout the cast is always incredible. I am extremely happy that Agents of SHIELD is back, and I’m left very eager for next week to see what the next episode has in store for us. What will the resistance do? Can they possibly take on Hydra? What is up Aida/Madame Hydra’s sleeve? Can our team do anything to help free their teammates? We’ll be back next week commenting on it all, until then #keepitnerdy