Disney continues their journey of adapting every one of their classic animated films into live-action. This time with Aladdin, they may have just made their most faithful adaption yet. The movie exceeded my expectations, which were admittedly low thanks to lackluster marketing. But the trailers and clips did not do it justice. Will Smith helped make this better than ok and gives a neat twist on the iconic Genie character that the late great Robin Williams brought to life. It hits every beat and adds a few more layers. I just wish they took it just a little further.

The start of the film did worry me a bit, as it seemingly rushed its way through the first act. It was like director Guy Ritchie, didn’t spend much time setting things up. But eventually, Aladdin settles into itself and keeps a nice solid pace throughout. The cinematography turned out really well, every shot from the trailer looked so tight, but that’s not indicative of what we got. There were some beautiful scenery shots and great action sequences. The music made the classic songs feel larger than life and Will Smith held his own. I was singing every song in my head in the theater and on my way home.

Aladdin’s biggest success was understanding that no one would top Robin Williams as Genie and allowed Will Smith to be Will Smith. The fan-favorite songs were done well enough and Smith’s charisma shines through much more here than it did in any of the marketing. 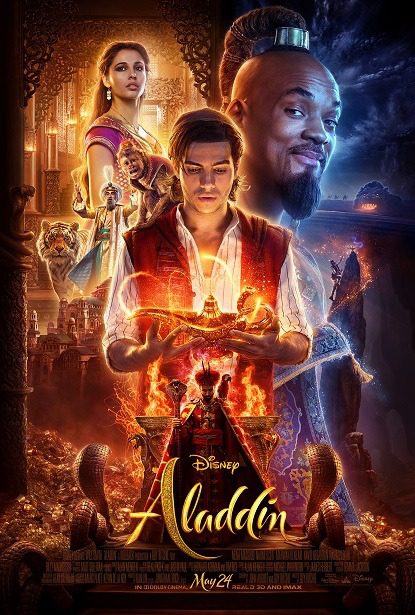 Naomi Scott also impressed as Jasmine, giving a powerful performance in a more fleshed out take of the Disney princess. Jasmine was always a strong character but I like the added story that showed off how ambitious she was. But I could have done without her handmaiden, Nasim Pedrad wasn’t terrible but her humor was almost always awkward. Marwan Kenzari isn’t the cartoonishly evil Jafar from the animated feature, and in its place is a more menacing/sneaky version which I actually enjoyed. The weak link of the main cast was, unfortunately, the title character. Mena Massound was solid and had great singing and dance scenes, but when it came to acting he felt a little wooden.

Staying close to the original, almost beat for beat at times, was the right call, but I really appreciated when Aladdin deviated from the source material. Even when some things didn’t land like a new character or a new song, there was a new layer added that really made the film feel unique. The new song was fantastic, yet it just felt like a contemporary pop song and was out of place. Though it did give Naomi Scott a chance to shine. The addition of Bollywood style dance scenes was absolutely wonderful, I wanted more of them.

Have you seen this:
A Glimpse at All Disney Studios Has in Store For Theaters and Disney+

I would like to add that the CGI characters suffered greatly from being adapted from animated. The Lago parrot voice makes sense, but him, carpet, Rajah and Abu felt like shells of their Cartoon selves. Abu and Rajah got laughs but lost all their personality. They were just there for the most part. It makes sense given that they’re real animals in the film but they were lacking. I was looking forward to Lion King much more than I was this film, but these animal characters make me wonder if it’s possible to pull off with the lack of expression.

Aladdin made the wise decision of sticking as close to the animated movie as possible and it paid off. It was a lot of fun and though it’s not a perfect copy, bit does enough new things well to prove that a live-action adaptation was warranted. It’s tough to truly critique something like this because everything I love about it was stuff I’ve seen before. It’s like reviewing a concert and trying to rate a really good cover band. They did pluck on those nostalgia strings as well as any movie out there, and I was singing those classic songs all the way home. I’d say Disney accomplished their goal, and the cast and crew should be commended for it.

Aladdin is a cover band, but it just may be the best cover band I’ve ever seen.