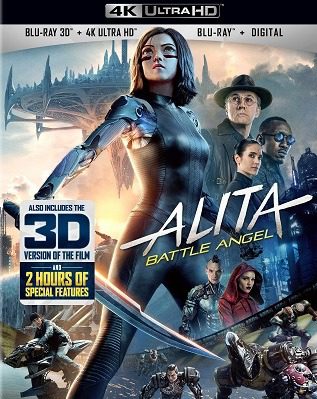 A deactivated cyborg is revived, but cannot remember anything of her past life and goes on a quest to find out who she is.

Alita Battle Angel is a film that is ten years too late. There once was a time that visionary director James Cameron wrestled with the decision between which film project, he should invest his time and energy into in 2009; Alita Battle Angel or a little project known as Avatar. You can guess which one James picked. As Avatar went on to become one of the highest-grossing films in history Alita languished in developmental hell.

It would sit on the shelf until Robert Rodriguez showed interest in 2017 to step in and direct while Cameron was in the midst of developing the Avatar sequels. It’s here that the flaws of the film begin to appear; even before the movie was shot.

In the special features, Rodriguez himself openly admits that he was more interested in working on a “James Cameron project” than trying to edit and rein in Cameron’s script. It’s right here that the film suffers as Rodriguez never infused his own passion and flair into the project; satisfied with the opportunity to work with a filmmaker that he admired. Instead what we get is a watered-down middle-of-the-road action film, that looks amazing, but ultimately goes nowhere.

Don’t get me wrong, the visuals in Alita are top-notch. The motion-capture performance that Rose Salazar did was terrific, but in today’s cinematic world of mega-blockbusters; where CGI and special effects are commonplace, what is on the screen in Alita is now nothing special. It might have been able to take on an Avatar-esque place in film history if this movie had come out in 2009, but in 2019 it has the feeling of been there, done that.

The sad part about all of this is that the special features were more captivating than the feature film. It was far more entertaining to learn about the history of the world that Alita inhabited, the history of the manga that the film was based on, and watch as the cast and crew brought the story of 2563 to life.

In fact, if you watch the special features there is a segment that has Robert Rodiguez teaching how to make your own homemade chocolate. Rodriguez is more passionate and excited in this short special feature than he is in making the movie. That should tell you all that you need to know about the, behind the scenes; I’m not saying that Rodriguez had trouble on the set, but you can tell that his heart isn’t in the process.

The film itself is standard sci-fi fare. A doctor/scientist discovers the remains of a cyborg in a junkyard, he uses the still active female brain inside that cyborg to place in a humanoid robot that he built for his now-dead daughter. He names the cyborg Alita in honor of his deceased child. Alita has no memory of her past life and looks at the world through the eyes of a child.

As Alita grows and develops an awareness of the futuristic world around her, she discovers that the doctor that saved her is also a hunter-warrior; a version of a bounty hunter. It’s through her exposure to violence that she triggers her memories of being a soldier in the conflict that destroyed most of the world.

Events unfold where Alita is placed in a newer, much more deadly body, she falls in love and gets caught in the crosshairs of a shadowy villain. I won’t spoil the plot, but just know that you’ll get your fill of the future sport Motorball…which is like roller derby and basketball mixed with Nascar and MMA.

It’s too bad that Alita didn’t come out ten years ago, I think that it would have been a much larger success. Not that a $404 million worldwide box office take, on a $170 million budget is anything to sneeze at, but this film could have been so much more.