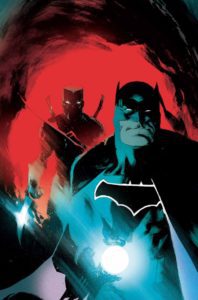 The intention to focus on Alfred’s backstory in the current arc is a strange one. It makes sense, he’s a pivotal character, and Snyder is trying his best to make it interesting, no doubt. And I even find myself curious to see it play out. However, for better or worse — and maybe simply by design — the story of “Penny One” pales in comparison to the ongoing story front and center starring Batman.

There’s already a great sense that we will never look at Alfred the same after this arc. We’ve always seen him as the level-headed, mild-mannered, subtly wise-cracking butler/nurse/confidant to Bruce/Batman, but of course there is an Alfred that existed long before he was any of that. The “elevator pitch” for this creative team to do an Alfred origin story is strong, and it’s not that the current level of writing and drawing leaves much to be desired. It’s just that it often feels like a distraction from the main plotline wherein Batman is again up to his cowl in trouble. If this wasn’t Snyder, I’d consider the Alfred sections a lost cause, but again, it’s been fun so far, and I think it’s safe to expect a big emotional and thematic payoff by the arc’s end. 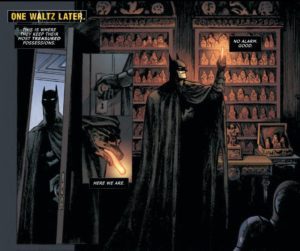 For this arc to be successful, it needs that. Snyder has shown for over half a decade now that he is a highly capable scripter when it comes to the action, introspection, and psychology of the hero. He has an undeniable grasp on the character. I guess after so many years with him, the writer needs to find new avenues through which he can tell an intriguing new Batman tale, and after several arcs already showing he can do that now as well, he landed on the Alfred arc. If I sound like I’m bashing it, I’m not really. I like Alfred. I think it’s almost mandatory to like Alfred if you like Batman. The latter would’ve died a hundred times over if not for the former. Sometimes in this arc it just feels like Alfred’s backstory, albeit worthy, is obstructing a cool, apparently new villain story in the A plot. Now, an Alfred spinoff prequel series — there’s an idea.