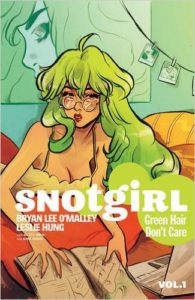 I never thought I’d ever read a comic with the title of Snotgirl. However, as an allergy sufferer myself, I instantly sympathized with the title character. Although, I wasn’t as connected when it came to fashion blogging – I tend to like tee-shirts and jeans all day, every day, thank you very much.

As a newbie to this series, it was quite fortunate I started with a trade paperback, as I was enthralled the whole way through. Imagine if I only started off with a comic of a few pages?

-rocking in the corner-

But that wasn’t the case – thank goodness.

At its surface, I thought it was going to be a light a fluffy comic story about the life of a fashion blogger who just happens to suffer from an unfortunate amount of snot 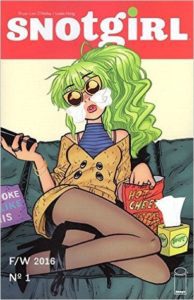 from allergies. Not my usual forte, but, life is short, and well, I just like comics! But my, my, what a surprise it was when murder and blood came into the picture. Ah-ha, so it’s not a simple girly tale of “Snottie” (a not-so-cute nickname given to the main character, Lottie).

Constantly given new, experimental allergy medication, Snottie (sorry I must call her that, it’s too good to pass up), experiences some “breaks” in her memory – or was it a true, mental break? After meeting a new girl, it appears she may have, well, killed her, until she magically shows up again…only to lead to another murder. Hoo boy, was I wrong about this comic.

Never judge a book by its cover, has never been a truer saying.

While it seems the new medications are slowly ruining her life, along with as ex-intern appearing to steal her life, Lottie still finds time to be absolutely fabulous, while hiding her extreme mucus-y affliction from the public.

Considering I tend to like the weird, bizarre, and often, science fiction types of comics, I was pleasantly surprised at how taken in I was with the tale of Snotgirl. This comic is for everyone – unless violence and boogers aren’t your thing. I mean, I’m not attracted to snot myself if that was what I ended up implying. I just happen to have allergies (but nearly to the extent of this fashion blogger, my word!).

What I’m trying to say is, Snotgirl isn’t what it appears to be on the surface, in fact, it’s so much more, and much more interesting than the life of a fashion blogger (unless you’re into that stuff, then, well, read it anyways).

Boogers and murder. Quite the combination. But an amazing comic!