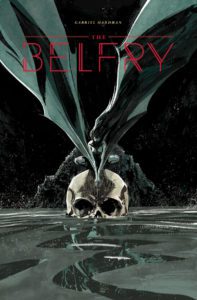 The first few pages of The Belfry do exactly what a first issue should do: grab your attention. A plane has crashed and the survivors inside begin the mad scramble to not only free themselves from their surroundings, but to also determine who else is alive. While most stories that begin with this premise would draw out the survivor’s plight for dramatic effect, The Belfry introduces the antagonists in the story early and amps up the action immediately. 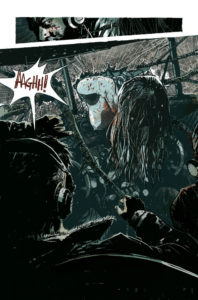 In this one shot, we are introduced to Bill, one of the pilots of the downed plane. He emerges from the cockpit and is immediately set upon by a giant bat-like creature, who bites him before flying away. As he lies on the jungle floor, he is revived by one of the flight attendants, who inform him that with the exception of a few injuries, the most severe to the Captain, there are no casualties.

As Bill makes the decision to try and find help, he stumbles upon more of the creatures who ascend to the sky and attack the survivors, abducting many of them before disappearing into the night. 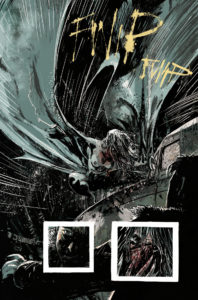 As Bill tracks the creatures to their lair, he is captured and reunited with the other survivors, who are beginning to turn. As they get sicker, Bill and some of the others are confronted by a mysterious stranger locked in a cage. They are confronted with a fate that might be even worse because they haven’t turned.

Gabriel Hardman has crafted a very well done story. His art is visceral, denoting an urgency in each panel that matches the pace of the plotting. The story draws you in from the first few pages and keeps your interest by not wasting time on unnecessary exposition. The only drawback to how well this one-shot delivers is that you want to read what happens next, especially in the way the story ends.

Have you seen this:
Nightwing #74 (REVIEW)

The Belfry well done story with visceral, engrossing artwork. The plot moves well and is well paced, but does leave you wanting more.