An Interview with the Creators of Image Comic’s INFIDEL

A haunted house story for the 21st century, INFIDEL follows an American Muslim woman, Aisha, her family (her husband, daughter, and mother-in law) and her multiracial neighbors who live in a building haunted by the spirits that feed off xenophobia. The spirits, by the way, are the formerly living tenants of the building caught in what many feel was a terrorist fueled explosion.

I had the chance to sit down with both Pornsak Pichetshote and Aaron Campbell at the Image booth at San Diego Comic Con. As someone who had grown up with a lot of amazing people from all over the Middle East I was very much intrigued by a comic book that gave voice to a Muslim perspective while at the same time weaving a masterful horror story. 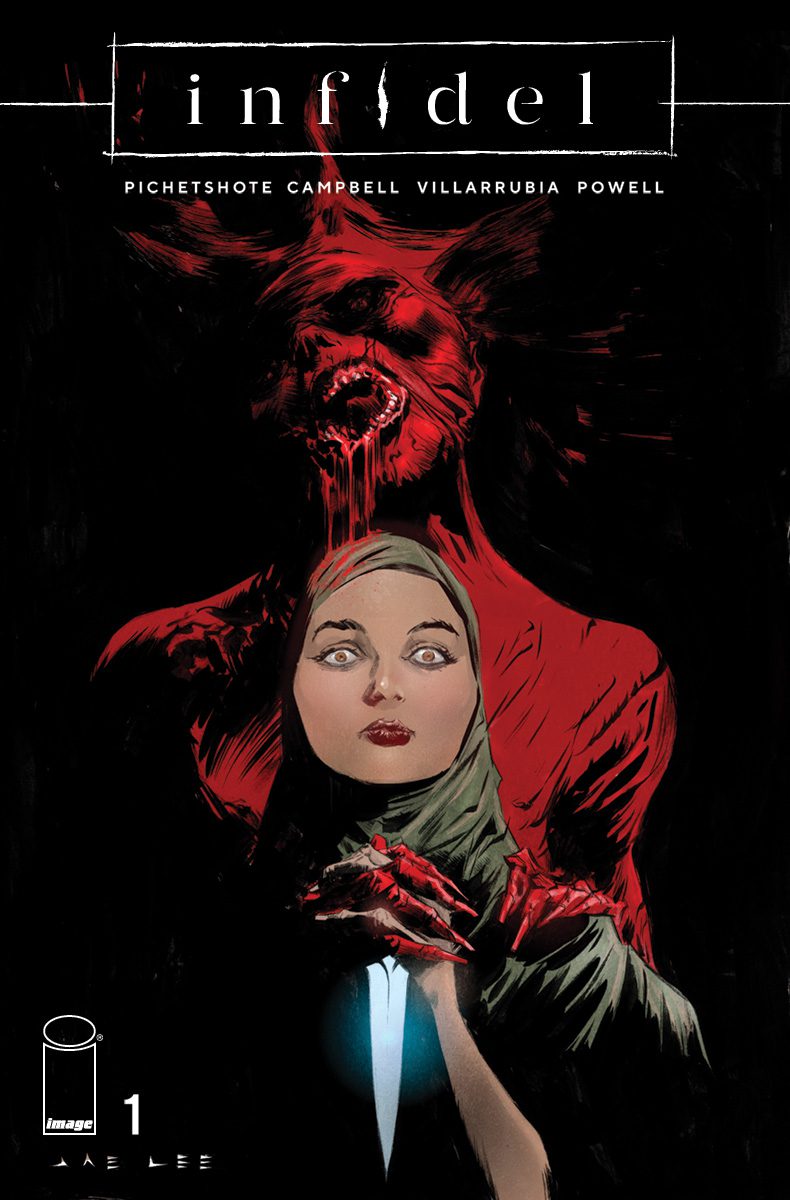 For those who haven’t read Infidel do yourselves a favor and order the 5-Issue story from Amazon or Comixology.com.

This interview had some great answers to some very tough questions. After discussing the topics at length with both author and the artist of this amazing story I left having one regret, namely that Infidel was ONLY 5 issues long.

James (GWW): What made you say to yourselves ‘Let’s see, a horror story from a woman’s perspective who is Muslim. Yes! That’s the story we want to tell’?

Pornsak Pichetshote: The genesis of the idea was sparked 8 years ago at the time Obama was President. Islamophobia was rampantly on the rise. The dialog about the Muslim faith in America that we are discussing today was just starting. And what we saw was a need to bridge the gap between Islamophobia and racism. Fast forward to today where the world is now what it is and those previous themes are now much more pertinent.

Looking back it didn’t feel right for the story to be sitting at a desk somewhere. The themes are personal. Especially racism, as I thought I was writing a book about America.

James (GWW): You mentioned that some of these themes affected you personally. If you don’t mind me asking, what were some of those things?

Pornsak: No, not at all. Asians are in this weird spot where there is racism that affects us and there is some racism that doesn’t affect us.

I’m not the worst off nor am I the best ‘off’ as I’m definitely somewhere in the middle of the spectrum.

James (GWW) Issue 5 of Infidel (the last issue of the series) is the one where I said you ‘nailed it!’ for a few different reasons. The element of horror was perfect and the character development was really well done. There’s no clear-cut ‘Hero’, but Medina (one of the main characters) is saved by Mr. Fields, the crotchety old white guy who lives in the building. That was an interesting turn of events. In a series like Infidel where racism and Xenophobia are featured so prominently. What was the thought behind that?

Pornsak: That was Aaron’s idea.

Aaron Campbell (AC): We wanted to subvert expectations because that’s what great horror does. Good horror creates great expectations throughout the narrative and at the end, and when it does it well, it turns the narrative on its head and makes people say what happened?

Pornsak: The scene originally was Medina trying to get through to Tom (Aisha’s husband), Medina does, and the crotchety old and white Mr. Fields shoots Tom. However, I changed it as I wanted to put in a plot twist that no one could see coming.

Aaron: I lived in a building like this in New York. and amongst the people that lived there were the older shut-ins who you would only see while taking out the garbage or picking up mail. And it was very easy to mistake their apprehension of people as racism whereas in all reality they could have just been older people who were just scared.

That was the inspiration for the character of Mr. Fields, this paranoid older man who would see you, run into his apartment, and would then slam the door shut. He probably doesn’t have any vocabulary to explain the way he feels.

Pornsak: The reaction a lot of people had to Issue #1 of Infidel was to expect Leslie, the white mother-in-law to main character Aisha, to be racist and irredeemable. Part of that is because we are now trained to see that in stories and in this one we do see that she is absolutely redeemable…  Now, the bigger question that wasn’t answered was whether or not she was, at one point, racist. I wanted to take common story elements, such as the evil white person, and re-examine them.

Circling back to Mr. Fields, the fact that this older white character has a gun in New York where there a lot of people of color is a political comment in itself. And the guy asked a question of ‘Now that he has a gun, what is going to do with it?’

That’s why I love political storytelling as the characters are influenced by their political stance.

James (GWW): One last question about issue #5. At the beginning of the issue we see a flashback of sorts where a white couple living in the building is lamenting life, as one person thinks she didn’t get a role due to the fact that she was white while her boyfriend reveals that he didn’t get the book deal he wanted and that they are behind in bills. And instead of taking positive action for themselves they emotionally pivoted and diverted their attention to the ‘weird’ middle eastern guy living in the building, went through his stuff, and inadvertently set off the explosion which takes place before the main story takes place. How intentional was it to show that the prejudice fueled decision making led to disaster?

Pornsak: That was definitely intentional. I wanted to talk about how prejudice and xenophobia doesn’t travel down political party lines which is why I showed the bigotry in Issue #5 coming from characters that considered themselves to be liberal. One could make the argument that it is not necessarily about what you say but more about how you react to what happens to you that defines a person’s character.

It’s part of the conversation we’re all having at this moment. Infidel asks the question of how far is too far when it comes to freedom of speech?

James (GWW): As a Canadian, and hopefully soon to be an American, I’m constantly amazed by how people in the United-States think that Freedom of Speech also means freedom from consequences from what you say. Which just isn’t the case, correct?

Pornsak: Right. You have the freedom to say what you want but just don’t be an asshole. And if you are going to be an asshole don’t be surprised that people are upset with you for being an asshole.

James (GWW): In one of the issues of Infidel a character named Ethan is investigating symbols with possible paranormal meanings. During that moment Ethan discusses how he may be unintentionally racist as he typically wasn’t attracted to women who are black. When he asks his friend if he was racist or not his friend can’t give him an answer. Ethan was pondering if he was, for lack of a better term, unintentionally racist. So, was that also an intentional aspect that you wanted to examine for themselves?

Pornsak: To me that conversation was very much what the book was about. We live in a time where we are talking a lot about racism and we can’t really agree on what it is, we can’t really agree on what it looks like. And if we don’t know what it looks like how do we rally and fight against it. The character of Ethan verbalizes the middle ground. He knows it’s happening, it’s a system that exists, and that he’s a part of it, and he doesn’t know where he stands in all of it. That question is what redeems Ethan as he is asking those particular questions to himself. I believe that if you are not asking those questions that you are part of the problem.

James (GWW): So what is your opinion on Ethan, is he racist or not? Is there a right or wrong answer?

Pornsak: There is not a right or wrong answer. Ethan is responding to the fact that Asian men and women who are black are marginalized sexually. He’s asking if he’s going with the system he’s in, going with the flow of the system, or will start to re-examine the system.

Aaron: The concept of beauty is definitely institutionalized and it’s only known that these ‘norms’ are being re-defined.

James (GWW): It seems that this question, as well as the rest of the book, is meant to shed light on the ‘big’ questions.

Pornsak: That’s exactly the point of the book. It’s about having conversations about a very ‘loaded’ topic that could go south very quickly.

Aaron: We didn’t seek to answer these questions as much as try to simply just ask the questions. We get into sticky territory especially if you try to answer it.

James: Ok. So when someone reads Infidel what do you want a reader to take away from this.

Pornsak: I want readers to be entertained and scared. So much of writing the book was me trying to ask if people, at the heart of things, are too tribal for a real multicultural society to work? I’m not sure what the answer is but I’m waiting to see what the world provides as a direction for it. I’d like readers of the book to ask questions and have conversations to help me understand and answer that specific question.

It’s affirming that so many people are having these conversations and are asking these types of questions.

James (GWW): So, you want a dialog to come from this.

Pornsak: Exactly. I’ve had these questions and conversations with friends and sometimes it gets awkward or I’ve felt like that I’ve had to hold back. I want us to get a point where we can have this dialog more easily.

James (GWW): And what about for you, Aaron?

Aaron: With Infidel I wanted to scare the shit out of people.

James (GWW): It did. It’s scary without being gory, which we’ve become desensitized to it. What was the inspiration of having the spirits designed the way they were? I haven’t seen that kind of demented portrayal of a spirit before.

Aaron: if you noticed, the spirits are contorted into the actual physical ‘shape’ or position they were in when they were killed in the explosion.

James (GWW): That’s disturbingly fantastic. So that’s why the legs of certain spirits are dislocated in weird directions and why other spirits look like their head is stuck in mid-explosion?

Aaron: Right. The body of each spirit is stuck in what was happening in mid-explosion. Their bodies are sort of being twisted by the concussive force of the explosion ripping through the building. I really wanted viscerally unsettling images.

All 5 issues of Infidel are available on the Image Comics website (www.imagecomics.com) and on Amazon.