Analog has captured a not too distant dystopian future where humanity’s reliance on technology and overall apathy have led to the internet being compromised and sequentially leading to humanity having little to no privacy. Accordingly, spy networks have turned to dealing secrets through paper or the analog way. We return in Analog #5 with Jack returning home from Japan only to be confronted by “Aunt Sam” informing him someone is dead after using Jack’s name on a job. Jack sets out to find answers in San Francisco.

Analog has consistently been one of my favorite books each week it is out and this week is no different. The book feels like a Cold War spy thriller set in a near distant sci-fi future. O’Sullivan’s art is fantastic and has a dieselpunk aesthetic that fits the time period and themes of the story perfectly. In addition, Spicer’s muted color palette adds to the grimness of this world.

This issue is the first time in the story readers are confronted with the repercussions of the new technological world outside of Jack and various spy networks. Jack passes food riots, comments on ICE, and casually mentions they are living under fascist rule. There are a lot of political undertones in this book that is reminiscent of Blade Runner or George Orwell’s 1984.

My one caveat with the issue is the pacing is slightly off as compared to previous installments but overall I greatly enjoyed it and continue to enjoy this story. If you have yet to pick it up and I recommend it. I look forward to what is next for Jack in the upcoming story. 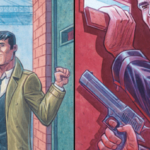