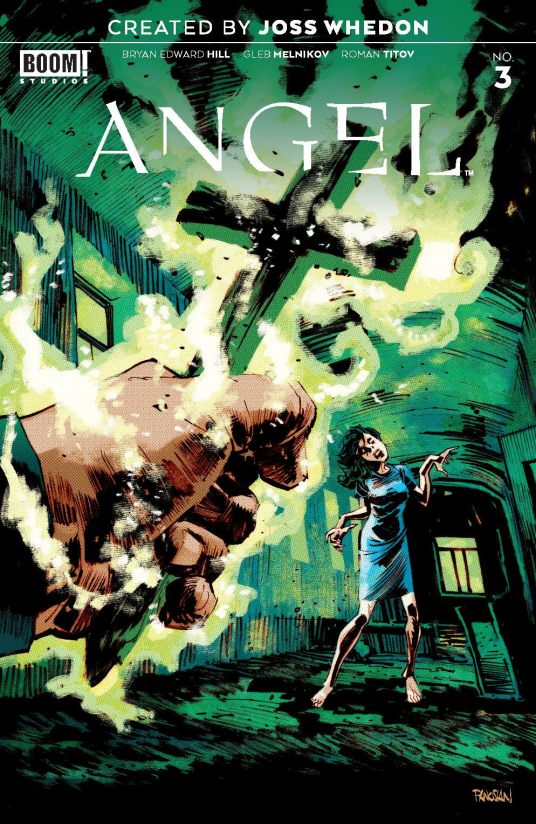 Angel’s mission to help a young girl possessed by a demon will put him face to face with both a potential new ally and possible threat.

Angel finds himself in a fight against a formidable demon for the soul of a young girl. At the same time, he has to reconcile all the wrong he’s done and the people who have died both at his side and by his hand. In the aftermath of the battle, he finds a young woman named Fred who is having some issues with ones and zeroes running through her mind.

Angel takes the young woman to his home and with the help of Lilith, he discovers that there is more to Fred’s psychological issues than meets the eye. After unlocking part of her psyche, he travels to a new world after learning a cryptic premonition about his future.

Bryan Hill does a great job of bringing the reader along on a journey and this issue showcases that skill. If you picked up this issue without reading the previous ones, you would be able to pick up on the story and the characters quickly and easy enough to become engaged with them and their world. Hill does a great job with the pace, tone and dialogue. Angel’s interactions are engaging and his memories are interesting without being morose. I enjoyed this issue and am interested in seeing where the story goes next.

Melnikov’s art is fantastic. The visual style is amazing and all of the details are a treat for the reader.