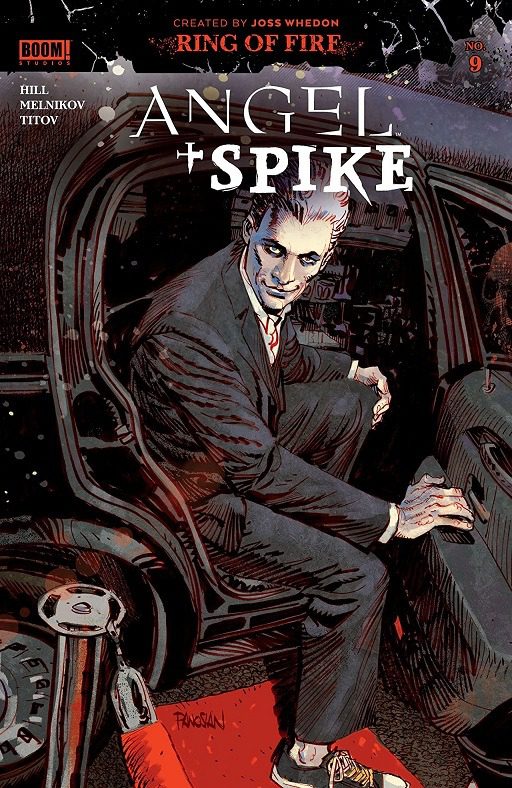 I am not ashamed that I am at times anti “re”. Whether its “boots” or “makes”, I tend to find it hard to justify their existence at times. With a bit of creativity I can go for an “imaging” but that’s my limit. So when it comes to franchises I enjoy I feel obligated to investigate and figure out how it measures up to the original.

I’m not certain if writer Bryan Edward Hill is aware of how I feel, but clearly he is a fan of the material as well. I’m only assuming this because of the structure of his utilization of the characters from the television series Angel. Rather than morph traits such as gender or race, the characters from the series remain mostly the same in this comic. The main difference up to this point is the when’s and why’s of everyone meeting.

Of course anyone who had been reading the series until this point would notice the title changed, while those new would struggle to find Angel + Spike #1. This annoying situation is attributed to the annoyance Angel discovers upon his return from the Hellmouth. The events of this crossover saw Spike end up in Los Angeles and Angel is not thrilled by his team’s new addition.

The tone and style of this comic is reminiscent of the shadow and darkness of the series. You can feel the detective vibe the show had during the early days of Angel Investigations.

As a fan of the television show, this comic is a worthy successor. The tension between Angel and Spike is as high as ever, their reasons written exactly as I remember. Angel hating Spike for not hating himself for what he has done. Spike hating Angel for being the first choice hero. Characters Gunn and Fred, both recent arrivals as well, give this story an added dose of de-just not vu.

A quick note of the cover shows a heading of Ring of Fire. As a fan of the show I think I have a good idea what comes next. Like Skip said, alot of lives coming together. Angel might want to ask Lilith to help him finish his list of allies, I think someone is coming to Los Angeles.