However, 2019 has brought us one step closer to that goal. In May, we had the charming, colorful Detective Pikachu, and in August, we have The Angry Birds Movie 2.

Once again featuring a bright palette and a rapid-fire pace, Angry Birds 2 doesn’t push any envelopes in the field of storytelling. You have your usual assortment of butt and fart jokes, sassy one-liners, a soundtrack of old tunes grown-ups can recognize, and a celebrity voice cast that is all but required in most cartoons nowadays. However, the story, which deals with themes of loneliness and a desire for recognition, helps lift the film into something more endearing. It’s something that kids will no doubt find entertaining, but that adults will also find charming. At least, until they are driven to insanity by their kids insisting on watching it again and again. 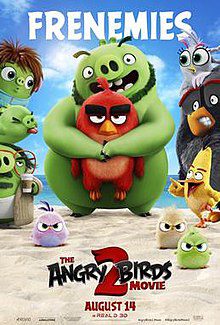 Red, fresh off of his victory over the Pigs in Angry Birds 1, finds himself in a funk. He’s beloved by the inhabitants of his island, but only for saving them. Additionally lacking a mate, he finds himself without a purpose. It isn’t until Leonard, the leader of the Pigs, comes to Red for help against a new threat (the Eagles) that Red once again finds himself with a mission. When he teams up with his old team of Chuck (Josh Gad) and Bomb (Danny McBride), they find themselves in need of one more member. Fortunately, Chuck has his heretofore unmentioned sister, Silver. With her engineering genius, the team is finally ready to take on the Eagles!

The storyline then unfolds in a way that is both predictable and not. Most folks, kids or adults alike, are aware of how a children’s movie will end. However, in between the obvious, immature jokes, Angry Birds 2 takes a few surprising twists and turns in its journey. Most surprising is the nuance given to Red’s anxiety to being left alone. While the sequences where he’s imagining his loneliness are played for laughs, they also reflect a real insecurity inside of him. Also surprising is the villain, Zeta, played by Leslie Jones.

While her storyline and conflict are resolved a bit too tidily for my tastes, she nevertheless is granted more sympathy and understanding than would be strictly necessary in a film like this. Little touches like those are what help elevate Angry Birds 2 from the realm of “tolerable” to “entertaining.”

In Angry Birds 2, we see a film that, rather than rest on its laurels as a cash-in, is making an honest effort to say something. To have themes, and rest on a moral for a kid’s movie that isn’t just “Be yourself.” And sometimes, that work of showing an effort being made is more than enough.

Have you seen this:
Best Film and Television of 2020
Angry Birds Jason Sudeikis Josh Gad sony