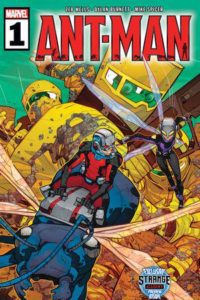 Marvel Comics thrive on their diversity of personalities found in their core group of heroes. Where the serious and more or less grounded realities and stakes can be found in Captain America and Wolverine, the same can be said for humor and levity in the likes of Deadpool and, of course, Ant-Man. The key to any layered issue, especially the first one in a new series, is finding a balance of humor and seriousness to keep the plot’s importance intact while remaining an enjoyable read.

Zeb Wells accomplishes this flawlessly in the first issue of Ant-Man’s new run. Any story with Scott Lang has to include his trademark quips and humor but needs to include real stakes for him as well. Lang’s goal is one that readers can connect with as well: proving himself to his daughter Cassie and frankly, the world.

How could an ex-convict with a failed security business and the ability to shrink and speak to insects possibly live up to the reputation of a hero in a world with a Norse god? That is the central question explored in the first issue of World Hive as Scott partners up with his daughter with her Stinger alter-ego to fight crime…and save bees.

That’s right, after bringing down a drug cartel, with some humorous father-daughter banter along the way, Scott’s spiraling lifestyle continues with his next assignment: help solve the mystery of disappearing bees in Florida. Living in an anthill with his daughter Cassie pushing him to accept it, Lang does so much to his humiliation.

What Lang finds in the case is not only a villain from the Nazi supervillain but new original villains that promise to be formidable foes for Lang. For the first issue, the entire team behind this absolutely nailed everything they need for a bright future in this series.

Lang’s humor and self-assuredness, even in the throughs of his bad luck, capture the lighthearted feel; which Ant-Man is dependent on within Marvel. All of which is further strengthened by Burnett’s art. The style of the issue is more cartoonish than some of Marvel’s more recent releases which are efficient in keeping the light-hearted tone even when touching on the more serious notes.

Overall, World Hive #1 sets its tone immediately with an action-packed opening and keeps consistent humor throughout that makes it an enjoyable read. Weaving in Scott Lang’s insecurities about fighting crime with his daughter, cementing his place as a legitimate superhero and whether he can face new villains by himself is a great start for what looks to be a promising series.