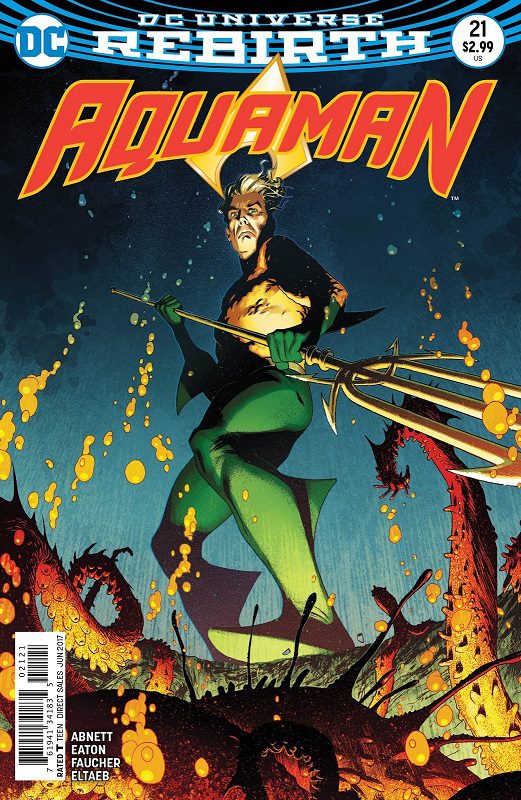 Dan Abnett’s Aquaman is swimming through some rocky waters of story arcs. Abnett penned the excellent “Deluge” storyline in issues #11 - #16 where Black Manta pitted the US against Atlantis. This storyline had scope and scale and the potential of lasting effects. Abnett then moved to a smaller, more personal, storyline for issues #17 and #18 that touched on the mental cost of war and conflict for soldiers. Now three issues into the current “H2.0” storyline, Abnett has finally begun to reveal something deeper to what appeared to be a simple monster-of-the-week storyline.

This expansion of scope is welcomed after two issues where the plot felt similar to so many sci-fi horror films. A crew, in this case one that includes the King of Atlantis, discovers an abandoned base. Something has killed everyone. They fight a monster that they do not understand and believe to have sealed it off, only to have it return. While the plot sounds stale, Abnett tried to keep it fresh by creating a threat that even scared Aquaman. While the fear of the crew continues to grow in this issue, Aquaman and Mera set out to explore the source of the problem. After two issues creating a confided fear on the base, Abnett opens up the landscape and creates a world new to Aquaman and readers. 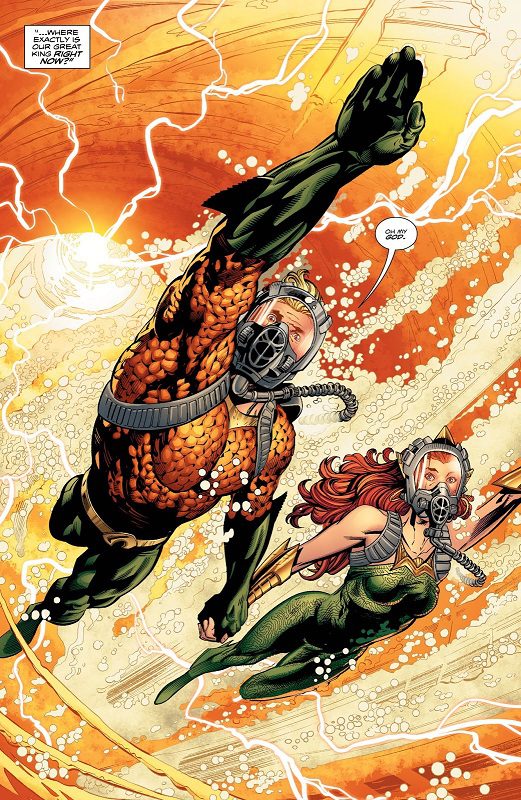 The newly discovered ocean world has interesting potential for Atlantis. Will the lifeforms perceive Atlantis as a threat or kindred spirits? Humans are not able to understand the communications from the ocean world which creates greater fear for the crew back at the base. Abnett creates a meaningful cliffhanger for this issue that threatens both the crew of the base and the ocean world. The consistent theme of Atlantians vs. humans has occurred again and again since the launch of Rebirth. This conflict of us vs. them and the fear of the unknown is at source the continued conflict with Atlantis and the surface world and the core of Abnett’s run on Aquaman. This storyline finally ties into that theme and is a stronger narrative because of it.

What initially seemed like a monster of the week side story has the potential to turn into a meaningful morality choice regarding the protection of human life at the price of destroying an unknown lifeform. Abnett has created a storyline that could have interesting ramifications for Aquaman, Atlantis, and human relations.

Readers who missed the previous issues in this arc can quickly catch up… There’s a monster and some water that appears alive.  Caught up? Good. Now dive in and pick up Aquaman #21. Abnett’s story finally picks up pace by creating new mysteries and threats, leaving readers with what could become a morality tale about fearing the unknown.