Aragami started its life as a student project titled “Path of Shadows”.  It was only meant to serve as padding for the team’s portfolio, but it got a lot of attention when it was uploaded to Game Jolt and it quickly became one of the site’s Top 10 most downloaded and highest rated games.  The small team from Barcelona, Spain that created the concept decided to come together to form the game studio Lince Works.  Their first project would be to turn “Path of Shadows” into a full game and, as such, they re-branded this spiritual successor as Aragami. 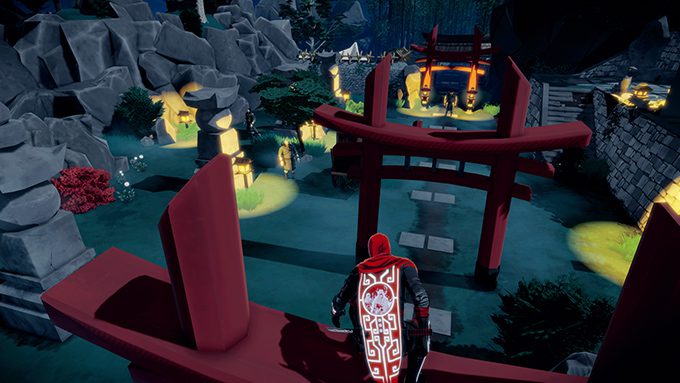 Stay in the shadows. Avoid the light.

The game’s main gameplay mechanic is stealth.  The developers took a lot of inspiration from the Tenchu series as well as Mark of the Ninja.  As in those games, you will find yourself at a great disadvantage if you attempt a direct approach, so get ready to embrace your sneaky side.  The game focuses heavily on navigating through the shadows and avoiding light sources.  How illuminated you are will dictate how well enemies can see you, but it also affects the use of your shadow-based techniques.  In neutral light, your techniques run on a finite pool of power.  In direct light, you will lose access to your abilities completely, leaving you incredibly vulnerable.  It is only in the cover of darkness that your power replenishes, so it is in your best interest to stay in the shadows whenever possible.

Have you seen this:
Mayhem Brawler (Review)

In addition to your main objective, each area also contains hidden scrolls that can be used to unlock or upgrade your abilities.  Temporary invisibility, projectile weapons and explosive traps are just some of these tools.  Relax, there’s also an ability to make the scrolls easier to locate, so you won’t have to tear your hair out if you want to find them all.  Upon completion, each stage is graded based on your playtime, how much suspicion you raised and how many times you were spotted.  You will also get awards for completing a level without being spotted, killing all of your enemies or killing none of your enemies.  I love when games like this let you take the pacifist route, so this is an excellent inclusion. 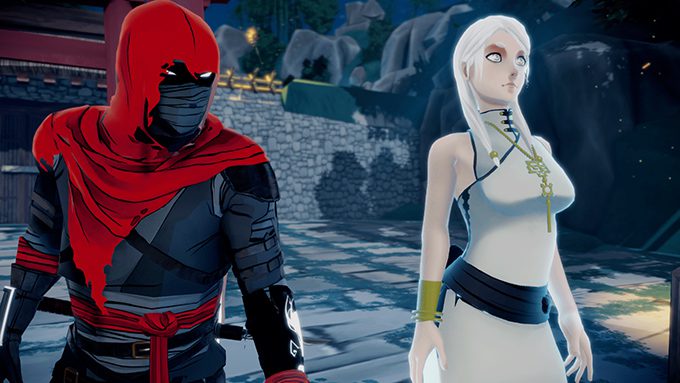 Yamiko informs Aragami of his mission.

In the game’s story, you assume the role of the Aragami, a vengeful spirit birthed of shadow and bred for death.  You have been summoned by Yamiko, an imprisoned girl who charges you with the task of taking down her captives and rescuing her.  Your enemies are the Kaiho Clan, a group of warriors with the ability to manipulate light.  Each stage begins with a cutscene that reveals more about the characters and the world.  It quickly becomes clear that Yamiko is no ordinary girl, but could there also be a sinister motive that drives her?  Why are the Kaiho Clan holding her?  And, most concerning, who are you and how did you really get here?

While the cutscenes contain voice work, the characters speak in a fictional language.  I found this to be an odd choice as the game is so clearly set in Japan and steeped in Japanese culture.  Still, I suppose it makes the game easier to localize.  Outside of the cutscenes, each of the scrolls I mentioned above also contain text that helps to flesh out the greater narrative of the game.  While not necessary to follow the story, it does help to shed light of the events of the past that led to the events you will experience in the game.  The scrolls are randomized, so you won’t be able to piece together the full story until the very end.  Still, the intrigue that the narrative creates was enough to keep me invested. 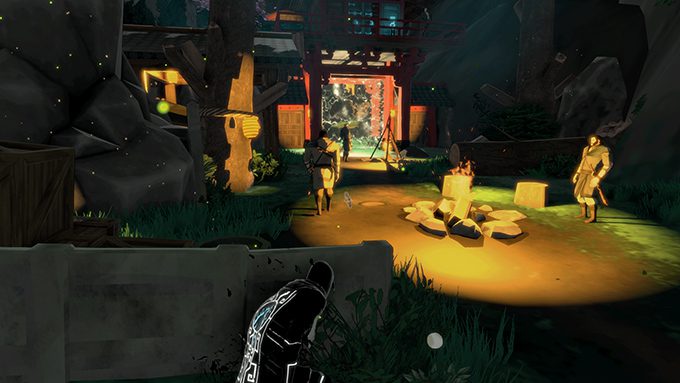 Take them out or sneak past them? The choice is yours.

Aragami is available now.  You can grab a digital copy through Steam for Windows, Mac or Linux as well as through the PSN for Playstation 4.  An Xbox One version is currently in development.  A physical Collector’s Edition for PS4 is available at major retailers which includes a digital copy of the game’s soundtrack and art book.  There is also a Signature Edition of the PS4 version which is signed by the developers and includes a physical copy of the soundtrack on CD as well as a printed version of the art book.