ARCH ENEMY Reveals Music Video For Debut Single, “The World Is Yours”

ARCH ENEMY have risen once again and are ready to accelerate at full force as they unleash the masterful new single, “The World Is Yours“, taken from their forthcoming album, “Will To Power“, due out on September 8 via CENTURY MEDIA RECORDS worldwide. 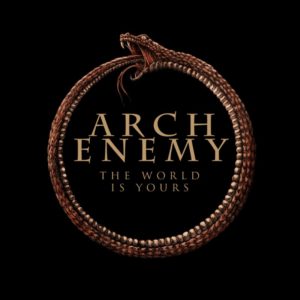 The massive debut track, which can be heard and seen in their rousing music video can be seen below. It will be offered as an instant download with all digital pre- orders here.

Mastermind Michael Amott comments, “We’ve been hard at work on the new album for a while now and we’re proud to present the first taste of new Arch Enemy music in over three years with our new single and video, ‘The World Is Yours’! This was the first song I wrote for the upcoming ‘Will To Power’ album and Daniel (Erlandsson, drums) helped me arrange and finish it up. One of many songs we co-wrote and co-produced this time around. We had a blast recording together with the full band in the south of Sweden and then mixing with Jens Bogren, who did a superb mix and mastering - in my opinion even surpassing the epic sound on our previous record, ‘War Eternal’. People that have heard this song in particular are saying it’s got the classic anthemic Arch Enemy vibe going on, and I think they might be right about that… Looking forward to playing it live on stage later this summer!”

Have you seen this:
Rumor: Alfred Molina Returns As Doctor Octopus in Spider-Man 3

“Will To Power” promises to be the ultimate statement of heavy metal supremacy and will mark the first album the band have recorded with their current line-up — ALISSA WHITE-GLUZ (Vocals), MICHAEL AMOTT (Guitars), JEFF LOOMIS (Guitars), SHARLEE D’ANGELO (Bass), and DANIEL ERLANDSSON (Drums).  The album was co-produced by AMOTT and ERLANDSSON, while being mixed and mastered by Jens Bogren (Opeth, At The Gates, Dimmu Borgir).

Following the immense critical acclaim from their anthem-laden triumph of 2014, “War Eternal”, ARCH ENEMY will continue to bring their thunderous live performances to fans worldwide on the “Will To Power 2017 International Tour” this Fall following a busy summer making appearances across the European festival market. The first leg of the tour will stretch across Eastern Europe from September 15 to October 11 with direct support from Jinjer. Further dates across Europe and North America are soon to be revealed. See below for a full listing of upcoming shows!

Have you seen this:
Netflix's Jupiter's Legacy Debuts Its First Trailer