After a quick moment to catch our breath after Supergirl, we jump straight into the next equally breath taking, spine tingling, chapter of the most incredible Crossover Event. One of the most brilliantly crafted Cinematic Events of the DC empire; Crisis on Earth-X. As we start this episode of Arrow, we learn that Alex and Sara, (who are kicking butt on almost Metahuman levels this event), subdued and captured Prometheus, locking him into one of the Particle Accelerator cells. It is here, we receive a HUGE reveal, and fan favorite call back as Earth-X Prometheus removes his mask to expose his identity…as Tommy Merlyn! The group steps back, leaving a stunned Oliver to talk to the doppelganger of his old friend. Oliver attempts to appeal to his sentiment, trying to win him to the heroes side, only to be essentially spit on by Tommy, who calls him weak and then takes a cyanide capsule to ensure he isn’t persuaded into revealing secrets. It was an awesome wink for the fans to get to see Tommy back again, even if it was for such a short bit of screen time. 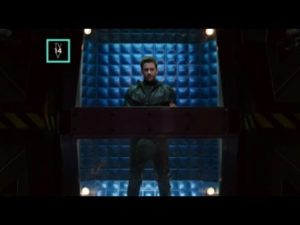 As the Reich reveals their plan to steal a Prism, Thawne confronts Overgirl with his concern of Dark Arrow’s passion for his wife and mourning the loss of Tommy conflicting with the Reich’s mission. Overgirl retorts by saying if it came down to it, she’d make the choice for Oliver-X to ensure the Reich’s plan continues. Meanwhile, our team at Star Labs discusses Earth-X, and its place as the ’53rd Earth of the Multiverse’ with the obvious paradigm shift of Hilter winning WWII. Then they locate the Reich at the location where they are stealing the Prism.There is the first of two major battles this season between Flash, Kara, and Oliver against the Earth-X Reich. One of the most fun moments is when Kara and Barry arrive and are stuck waiting and whistling while Oliver takes a few extra beats to arrive via motorcycle He informs the super duo ‘For the record, Super Speed, I don’t have it’ creating a hilarious moment to segway into a great reveal when Overgirl, Dark Arrow, and Reverse Flash remove their masks to show their identities as two Earth-X doppelgangers, and the Earth 1 Eobard Thawne (somehow yet to be explained) who is ‘wearing’ Harrison Wells appearance as a great big middle finger to Barry. Overgirl and Dark Arrow are revealed to be married, which evokes a giant ‘Gross! Oh, no offense’ from Kara. As the fight goes on, Oliver unleashes a Kryptonite Arrow into Overgirl’s shoulder, causing Kara to ask ‘Why do you have a Kryptonite Arrow?!’ ‘In case an evil you shows up!’ answers Oliver mid-fight. The one-liners are great across the entire cast, and the bonding moments between Kara and Oliver (both the good and evil versions) this episode are nice, expanding the bond amongst the actors across all of the shows. Back at Star Labs, Alex gets to remind the audience that she’s a brilliant scientist as well, beating all of the other super brains to the punch discovering the immense solar radiation that is saturating Overgirl’s blood, allowing for tracking the Reich’s movements. 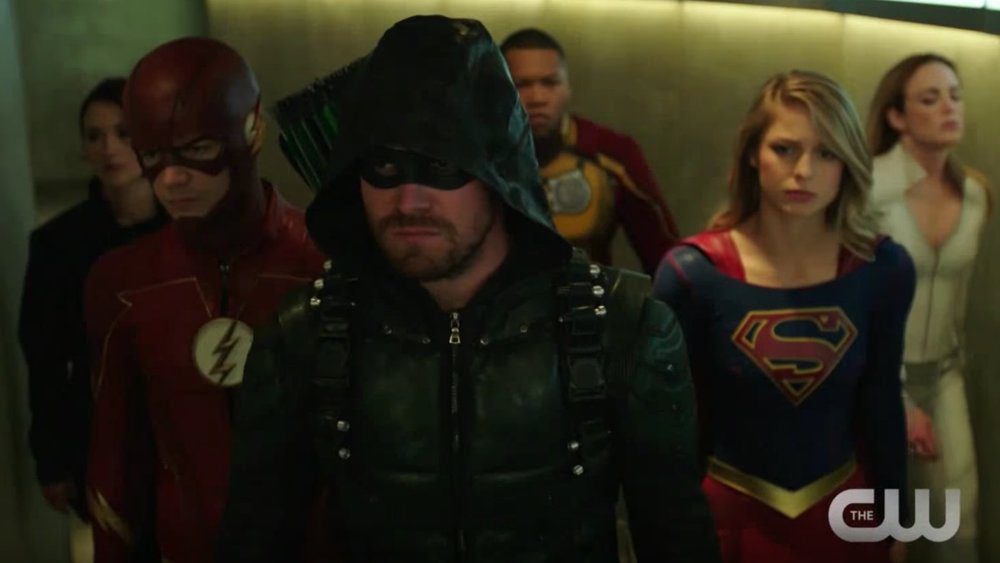 We’re also treated to a series of emotional moments across the cast. Jax and Stein discuss the disbandment of Firestorm causing Jax to reveal his fear of losing Stein who is like his father. Felicity and Oliver address the engagement elephant in the room, discussing the fear of being together resulting in their demise. Iris consoles Barry who is haunted by Thawne. Kara comforts Alex who is mortified by her one night stand with Sara, and her regret about Maggie. Kara tells her that the best thing about Maggie was she taught Alex to be true to herself, and to stop beating herself up. We pause on the individual character stories and get back to the battle at hand. Thinking the Reich is planning to use the Prism to make a Neutron Bomb, the team suits up to battle the Earth-Xer’s in a warehouse. As Flash, Supergirl, Sara, Alex, and Arrow battle Thawne, Overgirl, and an army of Nazi soldiers, Dark Arrow attacks STAR Labs, where he takes down Wells. Mick, (who forgot to leave for the warehouse because he was looking for mustard), tells Iris and Felicity to hide while he and Killer Frost fight Oliver-X. The Fire and Ice team up was a ton of fun to watch! Ultimately, Dark Arrow traps Mick, stuns Frost, and battles through Canary, Mr. Terrific, and Mad Dog who had arrived to help. The simultaneous battles switching back and forth are an amazing ballet of choreography and explosions; giving ample time to all of the characters involved, having them win, lose, and assist each other in beautifully thought out fashions. Eventually, the Reich overcomes our heroes, with those in STAR Labs loaded into the Particle Accelerator Cells, while those who were fighting in the warehouse, awaken chained and wearing collars (presumably power inhibiting) on Earth-X. It is here that the reason for the Prism is revealed, Overgirl is sick from the over-saturation of solar energy and is dying. She needs a new heart, and the plan is to take Kara’s. They want to use the Prism to recreate a red sun that would weaken Kara enough to extract her heart. Metallo, in a super scary T1000 form compared to the cyborg styling from Supergirl, arrives and blasts our heroes and the camera concluding part two, night one of this absolutely PHENOMENAL Crossover! 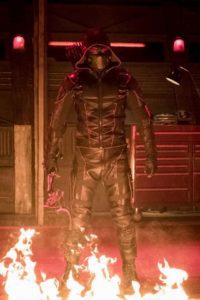 This episode, while including more exceptionally thought out choreography, gives us considerably more story and substance than our kick-off episode. With the reveal of the Earth-X relationships, we learn more about them and their plans. Including the source of the Reverse Flash, his distrust of Dark Arrow which is sure to come into play later on, their plan for saving Overgirl, and finally destroying our heroes leaving Earth 1 defenseless and prime for conquering. The chemistry of our massive cast continues to build with touching emotional moments, incredible rifts, and hilarious one-liners. This is the beauty of crossing over folks from the respective shows and changing up the usual pairings. The richness and continuity with this ensemble is something that the best films and longest running shows can only strive for. I spent two hours straight standing up out of my chair, unable to take my eyes off the screen, unable to pick my jaw off the floor long enough to take a drink. The caliber that Crisis on Earth-X has brought the Super Flarrowverse of Tomorrow up to is beyond my previous comprehension. As much as I loved these shows and crossovers previously, I never imagined that they could exalt to this level. To the point where at the halfway mark, I’m seriously considering that a roughly 3 hour (removing commercials) television mini-film, comprised from the CW network, is at the level where I am truly not sure if I enjoyed it or the multi-hundreds of millions of dollar Justice League film, which I seriously enjoyed, but 50% in, Crisis on Earth-X may take the throne!

What will happen to our heroes trapped at STAR Labs? Where are the other Legends? Will Cisco wake up in time to save his friends? What will our heroes do on Earth-X and can they save Kara? Tune in next time as we jump into part 3 of this earth-shattering spectacle on The Flash! Until then, keep it nerdy!