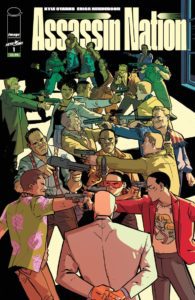 Assassin Nation #1 is a unique hitman satire. Although there is a fair amount of killing throughout the first issue, this is more a comedy than an action story. That being said, not every joke hits. For example, there’s an assassin whose name is a certain four-letter. It’s definitely different. The reasoning behind the name is funny, but it’s overshadowed by this overly aggressive name. Sometimes “overaggressive” works, though not in this particular instance.

The main character, Rankin (a.k.a. Chekov’s Gun) is insufferable. He used to be a great assassin, but then we find out later someone beat him out for the title. It’s probably what sent him into life as a crime boss. He probably discovered a method to cheat his way up the ranks of the assassins. One assassin, Wistful Stan, was ranked sixth among the worldwide assassins at the time of Assassin Nation #1 and he admitted to doing a significant amount of mercy kills.

Wouldn’t a former top-ranked assassin in the world know how to protect himself from someone trying to kill him — outside of doing what he already did in Assassin Nation #1?

Is he the character we’re supposed to care about?

Also, including an actual list ranking all of the assassins in the world was a great touch. It definitely was a good way to catch the reader and make it easier to invest in the story.

If you like over the top satire with a touch of violence, this series might be for you.