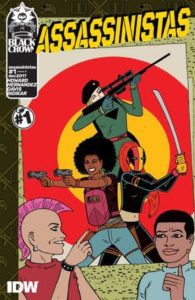 IDW has done it again! They have found a way to mix the chocolate with the peanut butter and have it taste delicious. Assassinistas is another Black Crown, this time bringing us a trio of kick-ass women. The style may look very “Josie and the Pussycats”, but do not let that fool you, this book is not child-friendly. While the language is there, it is only used where needed (do not thing Tarantino) and the violence is very minimum… for now. The best way to describe the comic is to imagine Kill Bill but directed by Wes Anderson. The problem is, even that description is an oversimplification, so let me just move on to my full review.

This issue starts by giving us a quick and impersonal introduction to the Assassinistas. There is Blood Orange, Scarlett, and Red October. All we know about this trio of killer ladies is that they used to be just that… killer ladies. Now they have grown and matured; changed with the times. Scarlett now has a five-year-old child with another on the way, and Red October sells insurance. (I will give you a hint that one of these may be a cover.) The only one who has not left the old life behind is Blood Orange. What she has planned is not entirely clear at the moment, but I like that in my media. It is a nice change when you get to learn and grow with the characters. 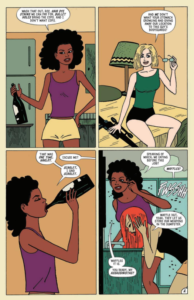 Red October, we find out, has a boy in college during this time, as well. His name is Dominic Price and Red thinks she has kept her secret from him. Turns out, he is better at hiding things than she is. Dominic learns that he has to take a semester off and return home to help mom at work. I can only imagine where things are going to go from here. As fast paced as this first issue was, I do not think we will have to wait very long to find out. In fact, Red learns Dom’s secret before the final page. What it is and how she handles it is for you to find out when you pick up this first issue.

As always, I have to bring up the art in the books I read. As I mentioned before, the line work in here is very 1950s – 60s. I say that not to downplay it at all. Sometimes there is a story that needs to be told and only one style of art that can accompany it. That is what we see here. Even though this story is set in the modern age, as you can see by the use of cell phones, it is also a timeless tale. Think Charlie’s Angels and the like, but with higher stakes and more powerful women.