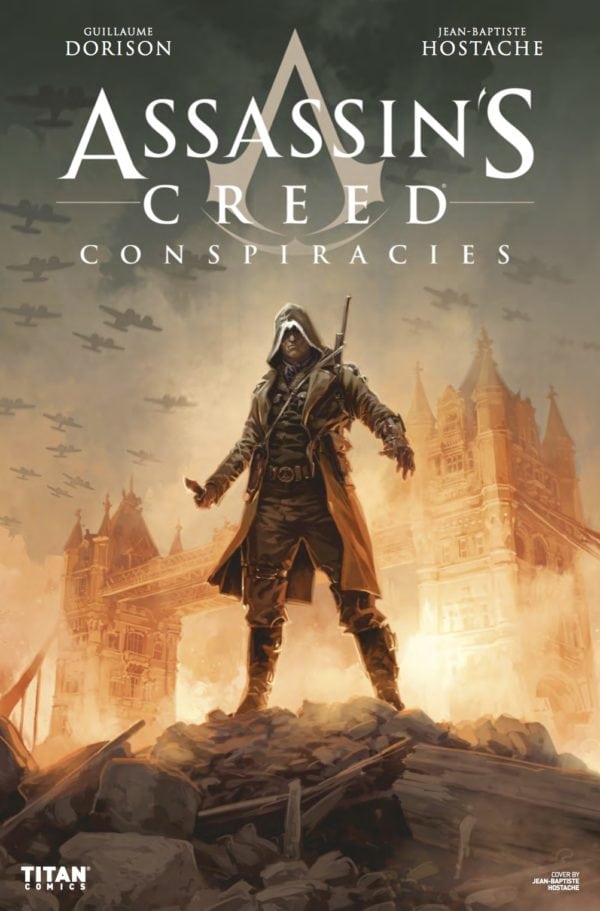 Dorison takes us through the story of Englishman Eddie Gorm, a former military man who’s thrust in the battle between the Templars and the Assassins mid-World War II.

If you’re tired of the overdone Nazis vs. Allies stories, don’t be so quick to pass on this story. This issue focuses on Gorm’s internal struggles – and he has QUITE a few of those – and his introduction to the behind-the-scenes battle that’s dictated the course of history for centuries.

Gorm carries this story, which makes sense being the main character and all. He’s good at what he does but wants absolutely nothing to do with any of it.

Between his conflict within, the twists and turns throughout and the great action there’s a lot to like in the Assassin’s Creed: Conspiracies #1. (Though I wouldn’t mind just a little more Hidden Blade of Aguilar.)

Hostache did very well with the art. I really appreciate him not making the characters superhero-like. Because these characters are supposed to be real people, so they should look like real people.

Although this is a double-issue, this is a fairly quick read. There are times where the dialogue goes long, but every word is absolutely necessary to the story. Especially because Dorison doesn’t take us in the mind of Gorm, or anyone else. This is all third person perspective – which makes each conversation and reaction all the more important.

And if you give this issue a read, you’ll definitely be back for Assassin’s Creed: Conspiracies #2. Because Dorison can take this in two directions and it’s 50/50 where he goes with it.