At the Mercy of Amanda Waller in “Justice League vs. Suicide Squad” #3 (Review) 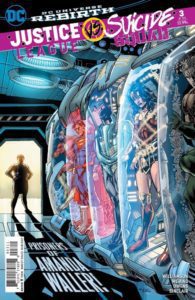 After the epic battle from the last issue, the Justice League is captured and in the hands of Amanda Waller. As the League finds themselves in a series of specially designed cells and at the mercy of the Suicide Squad, Katana and Rick Flag are investigating the massacre at the Catacombs. While the Squad gloats at their triumph, Caitlin worries about the extent of her powers and whether or not she can maintain control. Waller makes the quintessential mistake in holding the Justice League indefinitely, never underestimate Batman!

As the Dark Knight escapes from Waller’s guards, he confronts the ultimate manipulator in the heart of her den. As both sides wonder which has the upper hand, Max Lord and his team are 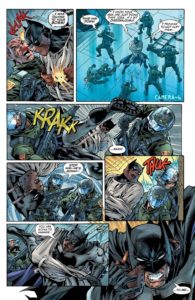 moving closer to their goal of finding a weapon that they are told should never be released again. Waller decides to release the League, bringing both teams together in order to propose a truce with a single goal in mind: protect Amanda Waller. As the Justice League ponders the options and the Suicide Squad breaks into uncontrollable laughter, Batman knows there is more to the proposal than the spy master is willing to let on.

Joshua Williamson continues to ramp up the action and suspense in this issue by crafting a plot that is in forward motion from the first panel. You get the sense of impending doom from Max Lord and his team as the League and the Squad continue to struggle with each other and their own individual team dynamics. Jesus Merino does a good job of showing action through his composition and his shading gives an added menace to Max Lord and Lobo especially. This series is building to something interesting and I hope it delivers a satisfying story arc that keeps me interested.

Justice League vs. Suicide Squad continues to satisfactorily unfold with revelations that are informative and exciting as the story progresses. The artwork is very well done as it continues almost the same style as the last two issues which allows the reader to concentrate on the story.