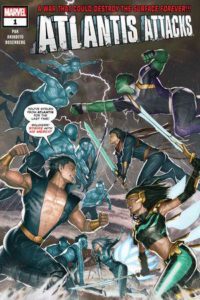 As the Agents of Atlas protect the seeming paradise of Pan, the creature behind the cities technology will garner the attention of the king of Atlantis.

Amadeus Cho and Silk still marvel at the technological beauty that is Pan, but both know that the power Mike Nguyen is using is dangerous and unethical. Amadeus is conflicted about shutting things down especially with the constant influx of refugees fleeing from Madripoor and other places.

Unfortunately, he won’t have long to contemplate things as Namor is alerted to the capture of the Atlantis Dragon and how it is being used by the surface to open the portals to Pan. Enraged but weary of war, the king of Atlantis goes on the attack and takes on Amadeus and Silk. The Agents of Atlas leader tries to reason with Namor, but the king is using the attack to send a warning as well as gauge the strength of his opponents.

Entertaining and thrilling, Greg Pak delivers with this first issue. The plot is well done and the characters are compelling, especially in Cho’s conflicting feelings towards helping the people of Pan while also knowing that how they use this captured creature is wrong. Having him face off against Namor adds some drama to the plot and also gives the reader a new perspective on the events through Namor’s eyes. Both heroes are taking their equivalent of the moral high ground in this conflict and both of them can’t be right. It’s an interesting and engaging story that I want to see more of.

Anindito does an amazing job with the art in this first issue. The characters look great and the attack on Pan is filled with beautiful details that complement the tone of the story.