Atlantis is on the Mind in Powerless S1XE03 Review 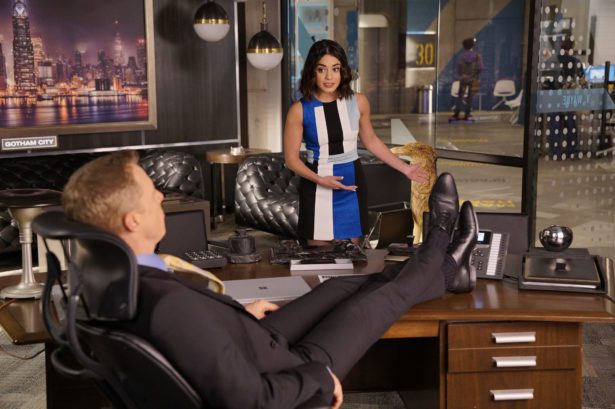 Episode 3 sees Van Wayne (Alan Tudyk) congratulating himself on the 35% increase in sales that his division is responsible for which annoys Emily (Vanessa Hudgens), who is directly responsible for it. Van is hoping to parlay this victory into a promotion to the Gotham office by trying to appeal to his father, played by Corbin Bernsen, who sits on the Wayne Enterprises board. We’re also introduced to the A plot of the episode which is about the celebration of Sinking Day, which is the day that Atlantis sank in the ocean. The news relays information about an attack on the city itself (from reporter Marv Wolfman) and we learn that Ron (Ron Funches) is actual from Atlantis, not Atlanta. A joke that gets repeated throughout the episode and only being amusing the first time when it forces a Donald Glover reference.

Emily decides to brush off Van and get back to work on the team’s presentation to ACE Chemicals, one of their biggest clients. ACE Chemicals is also the factory where Joker fell into a vat of chemicals that made him who he is. A point that is made by Emily as she points outs a common cause for supervillains is their tendency to fall into vats of chemicals to the tune of one clown criminal every three months. When the CEO of ACE Chemicals sees that the force field technology that he commissioned from Van wasn’t sent out to his team, he pulls their contract. A contract worth 75 million dollars per year. A loss that prompts Van’s father to fly in from Gotham.

Another story playing throughout the episode is a new employee named Alex who Jackie (Christina Kirk) is enamored by, but the other employees are suspicious of. Especially his stream of absences that coincide with a new hero in Charm City showing up to save the day named The Olympian. They speculate about whether or not the two are connected and this leads to one of the only real laughs I had in the episode when Ron puts forth his theory that Bruce Wayne is actually The Flash and that Stephen Baldwin is really a character played by Alec Baldwin. 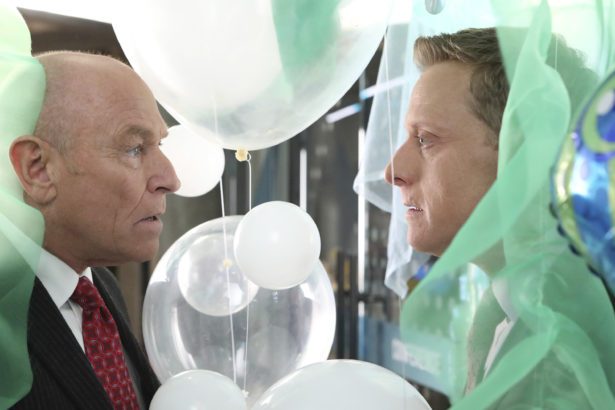 Emily decides to enlist Van to help find a new client in order to get a promotion for herself as well as help Van earn back his father’s respect. In order to do that, Emily decides to try and sell security devices to Atlantis. As Emily hooks them in (a phrase Atlanteans don’t appreciate), Van interrupts to tell the delegation about his annual Sinking Day party and his close friendship with Aquaman. News that excites the delegates, who insist on being at the party to meet their prince. Emily is then put in the position of having to fix another one of Van’s messes. 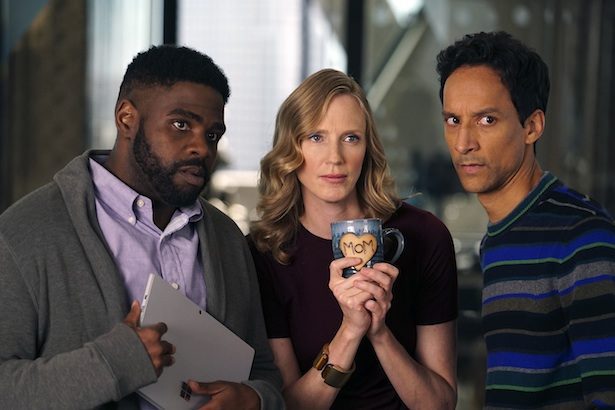 As Ron, Teddy (Danny Pudi) and Jackie continue to try and prove that Alex is The Olympian, the Atlantean delegation arrives to see the office decked out in gaudy, fish themed decorations. A sight which they actually find enjoyable. As Van steps up to seal the deal, his father arrives to take over.

The cast does really seem to gel in this episode and there are some uniquely cute moments throughout, but this episode just wasn’t that funny. The biggest smiles I had while watching it were for the references that I got that, if someone who wasn’t familiar with the DC universe was watching, would have gone over their heads. While it’s fine to give fan service occasionally, you also have to make the show funny. This episode wasn’t. In the grand scheme, that might not be a big deal, but TV doesn’t work the same way it used to and if this show wants to see a season 2, they should focus on the comedy and let the DC references happen organically.