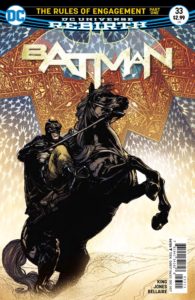 Batman and Catwoman make their way to a restricted territory to meet with an old foe.

The big reveal at the end of the last Batman issue had Selina accepting Bruce’s marriage proposal. Luckily, Tom King doesn’t make us wait to see the aftermath of such an event. This was a really fun issue and showcased more humor than previous chapters. I enjoyed how Batman and Catwoman’s journey to the restricted country of Khadym was slowly revealed to us. It was also nice seeing all the cameos, it’s been a while since the last time the Bat-family was featured in an issue of Batman.

The artwork had some really wonderful layout designs. The desert clothing on both characters looked fantastic, Batman’s being quite similar to his nightmare sequence in the Batman v Superman movie. Catwoman, in particular, looked great in terms of character design. 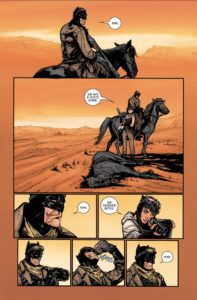 The art did have a few hiccups, mostly related to the sidekicks. Dick Grayson, Jason Todd, and Damian Wayne all looked off and roughly the same age. It wasn’t until their names were actually said, that I knew who anyone was. Joëlle Jones’ artwork is fantastic on other projects and through most of this issue, but the Robins were a lowlight. Another problem I had was the big reveal at the end. Who it made a ton of sense, and her reaction to the engagement should be interesting. But having the revealed character surrounded by what I assume are her lovers, was off-putting. My guess is that they wanted to give her a sense of agency, and didn’t want her to appear like a jilted lover pining over Batman. It’s also not out of the realm of possibility for the character, but it was still just… weird. Perhaps an explanation will come later on.

Minor problems aside, this was a great issue that felt like a slice of lifestyle story. Some of my favorite superhero comics are when the writers allow a hero to put their hair down and live life. Most of the interaction between “Bat” and “Cat” was cute. King writes them together so well, it almost makes me believe that they’ll get married and live a happy life. But Batman fans know better, and King has a knack for making things really painful for his main protagonist. Just read Mister Miracle or anything he’s ever written.