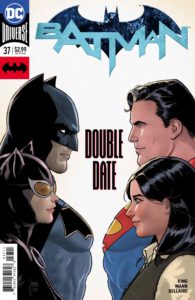 Clark and Lois have finally meet Selina Kyle who will be marrying Bruce. So, the two couples head out to the fair on a double date.

There are two quick ways to my heart in comic books: an Elseworlds story, and a slice of life featuring superheroes doing mundane tasks. This double date was definitely the latter, and it was wonderful. Having all of them switch costumes was delightful, and a neat thing to read. I only wish Clark would have smiled more in the Batman costume to stand out more. Their body types are so similar that it would have been tough to tell Bruce wasn’t in the costume if not for the glasses. The issue was really sweet though, and it helped strengthen the bond between Batman and Superman - a friendship that hasn’t been the same since the pre-New 52.

It strengthened one friendship and possibly ignited another. Catwoman and Lois Lane really hit it off in this issue, which was a surprise. They were the stars of issue and initiated all the best parts of the story. But there was an odd moment when Selina stole a muggers wallet and Lois laughed it off. The guy may have deserved it, but it was weird seeing robbery being shrugged off like that. Catwoman is really being played up as Batman’s perfect partner, all in spite of her past misdeeds. Which, to be fair, was a point of conversation in the issue. I still contend that things are going too well for a main character of a Tom King story. Maybe he got tired of putting everyone he writes through hell. It’s hard not to be happy with the current situation and hope King writes a happily ever after for Bat and Cat. With the theory that this marriage was sparked by The Button storyline, maybe this is something for the long haul. Having Thomas Wayne return to tell his son to give up being Batman was bound to have an impact, so far it hasn’t, at least overtly. 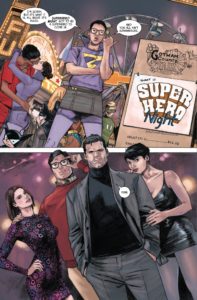 The artwork by Clay Mann was beautiful, as always. The dressing room sequence may get a few comments, but I loved what he did in is issue. His style isn’t ultra realistic, yet the characters never felt more real. Jordie Bellaire’s colors are Gods gift to comic book readers. She transitions between different genres of comics so effortlessly. She gives every series she does(and she does a lot) a personal touch.

Admittedly, there were a few things that seemed a bit out of character for Batman, Catwoman, Lois Lane, and Superman. But I’m a sucker for putting superheroes in ordinary situations, so I adored the hell out of this issue. If Tom King’s objective with this Super Friends arc is to lull us into a false sense of security and soak in all the marriage happiness, then mission accomplished. Just tweak the Brave and the Bold format and make it nothing but superhero double dates. Black Canary and Green Arrow would be a great next couple. Let’s just ignore Tom King in the corner plotting something heart wrenching and devious. Great issue and a must read for Batman and Superman fans. Though that ending doesn’t happen in the Superman series.

Batman Clay Mann Superman Tom King
Are you an Insider?News, reviews, & updates are just the beginning.