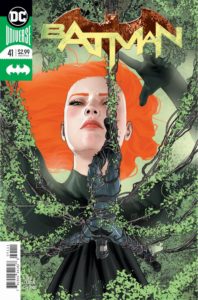 Bruce Wayne awakens to the voice of Poison Ivy only to learn that she has already enacted her plan to take over the world.

I’ll give Poison Ivy fans credit, whenever she shows up in a comic book I think of them. I don’t always agree that Ivy should be a full blown hero, I prefer the anti-hero approach, but I’m with them on there needing to be consistency in how she’s written. Well, that still hasn’t gotten any better, because the same person who not that long ago was saving the world with the Birds of Prey has now taken over it. Though I expect another amazing story from Tom King, her constantly changing personality was distracting. But it is still early in the story, she could very much purposely not be herself. Ignoring that, I did enjoy the issue despite it feeling short. The beginning with Bruce Wayne struggling to fight off mind control was great because you just know Batman doesn’t simply go crazy, so it was exciting to see what the hell was going on. 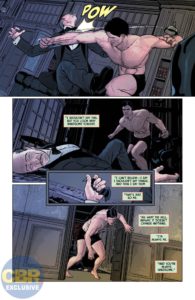 Mikel Janín has returned to the Batman series and his artwork continues to be gorgeous. It’s like every character he draws is jumping off the page, they’re also easy on the eyes. Seriously, I’m sure even his Harvey Bullock looks suave. I’m excited to see what madness he draws when Poison Ivy’s plants inevitably come into play.

Admittedly there isn’t much in this issue, but I couldn’t be anymore excited to see what happens in this story arc. How often in a superhero story does the hero wake up to a world already lost? Just the scope of Poison Ivy’s control is an exciting prospect. She has so much to play with and we’ve already got a hint of it with a Justice Leaguers cameo. This was a really fun start to a story arc.